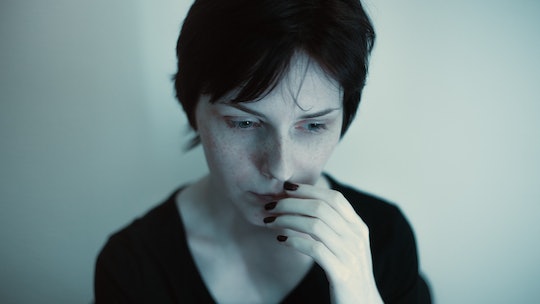 5 Symptoms Of The "Booby Blues"

You don't have to love every aspect of breastfeeding to feel sad in its absence. Usually, weaning brings about many mixed emotions, whether it's mother-led or child-led. Those who feel upset about breastfeeding before or after weaning, however, are most likely experiencing "booby blues." It's a less talked about maternal emotional condition, but one that has thankfully become more mainstream in recent years. And the symptoms of booby blues are similar to other forms of depression, which makes it helpful if you're looking out for it.

"We often hear about postpartum depression in new moms, but weaning from nursing can also lead to depression in moms often referred to as the 'booby blues,'" Kimberly Hershenson, a therapist specializing in motherhood issues, tells Romper. There is, however, one major difference between the two forms of depression. "Unlike postpartum depression, which can take months or even longer to recover from, the booby blues seem to resolve within weeks as women's hormones rebalance," Hershenson says. This is encouraging news for anyone that thinks they might have booby blues as it seems the issue can be taken care of fairly quickly. The bad news is that, because hormones are at play, any mother that's breastfeeding could end up struggling with the condition. No one is immune to it.

Thankfully, there are some signs to watch out for. Here are five red flags of booby blues that will help you feel less alone, and may even motivate you to seek support from a loved one or professional therapist if you need it.