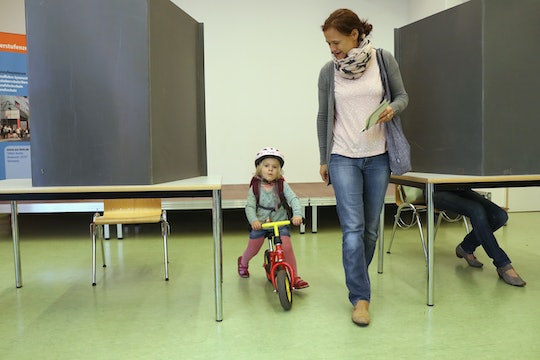 What Moms Should Know About The Better Care Reconciliation Act

Senate Republicans have finally unveiled the Better Care Reconciliation Act BCRA, which is meant to replace the Affordable Care Act that parents have come to know and love (or, you know, viciously hate) over the years. Unsurprisingly, the BCRA looks a lot like House Republicans' infamous American Health Care Act, albeit with a few changes, and the new health care plan could mean quite a few departures from families' current offerings. In case you're looking for a SparkNotes approach, here are five main things moms should know about the BCRA.

The current draft of the BCRA was revealed on Wednesday, and the public quickly scrambled to figure out how the new health care plan would affect them if passed. After all, for moms who are planning to have kids soon or who already have a few children in their care, a new health care plan could mean huge changes.

Some families would have reason to rejoice if the BCRA made it through the Senate, of course. Households earning over $250,000 would see two different taxes affecting them lifted, according to Vox, and they would benefit from the changes. But for the large majority of Americans — and many moms — the BCRA's changes would make health care more difficult to manage.

It Would Cut Medicaid, Impacting Millions

The BCRA would drastically cut federal Medicaid funding over several years, slashing the number of low-income families that could access Medicaid and affecting the quality of the insurance provided. According to The New York Times, 74 million Americans rely on Medicaid for their health care, including 40 percent of all American children.

Considering that Medicaid covers nearly half of all births in the United States and helps pay for women's health, reproductive services, pregnancies, and birth control, the cuts will affect women's ability to access family planning.

It Will Defund Planned Parenthood

This is another area where the House and the Senate agree. According to Time, the BCRA would defund Planned Parenthood for at least a year. It would essentially stop Medicaid dollars from going towards Planned Parenthood, stripping the organization of 75 percent of the federal funds it currently receives.

According to Planned Parenthood, 2.4 million women, men, and young people visit its health centers every year for birth control, cancer screenings, and family planning services. Over the course of 365 days, the organization carries out hundreds of thousands of pap smears and breast exams, and it provides services to prevent unintended pregnancies to 80 percent of its patients.

You Could Lose The Insurance You Receive Through Work

The Affordable Care Act imposed penalties on any large employers (those with 50 or more full-time employees) that didn't offer adequate health care coverage to their workers. The Better Care Reconciliation Act would get rid of the employer mandate and remove those penalties, meaning that if the act passed in the Senate, many families could be forced to find their own coverage moving forward.

When you think of how a health care program could affect your kids, the elimination of a public health fund might not be the first thing to come to mind. But if the BCRA axes the Prevention and Public Health Fund as promised, the Centers for Disease Control and Prevention could lose over half of its immunization funding. That means less money for life-saving and preventative vaccines, less personnel to administer vaccines, a limited ability to respond to public health outbreaks, and less monitoring of vaccine coverage.

We're not only talking about vaccines against the measles and mumps, either. This will affect the number of young people vaccinated against HPV and limit the CDC's ability to respond to threats like Zika. And all of this comes at a time when vaccine-preventable diseases are making a scary comeback in the United States.

States Would Be Able To Opt Out Of Essential Health Benefits

The BCRA, like the American Health Care Act, would allow states to opt out of essential health benefit requirements — meaning mandated coverage for maternity and newborn care, pediatric services, emergency services, and prescription drugs could all disappear from insurers' mandatory coverage. For pregnant women and parents whose children have disabilities, that's a scary thought.

And while the BCRA would protect those with pre-existing conditions from higher premiums, the cut to essential health benefits would mean some patients could lose out on treatment for chronic diseases, mental health concerns, and hospitalization.

According to Fortune, leaders in the Senate are hoping to vote on the BCRA as soon as next week — which means that if you're concerned about how the new health care plan could affect you and your family, now is the time to contact your senator and express your views. Find your senator's number online and make sure you call ASAP to let them know how you feel.