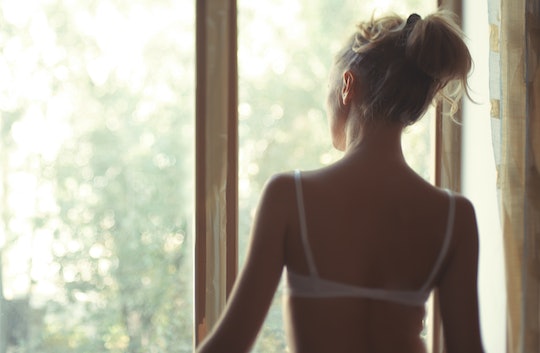 5 Things That Happen To Your Boobs During First Trimester Sex

During pregnancy, your body changes an intense amount. Between the physical and emotional altercations, there's enough going on to make you feel slightly out of sorts when it comes to what's going on with your body. And the same goes for sex during pregnancy. You may experience a few different things during pregnancy sex than you did before you conceived. Especially when it comes to your boobs. When things are just rolling into action, there are a few surprising things that happen to your boobs during first trimester sex.

Because your boobs are so amazing, it should come as no surprise that they're going to do some out of the ordinary things when you bring pregnancy into the picture. In the first trimester of your pregnancy, your body's going through some major changes. Between hormones, your mental state, and the rate at which you're doing your best to keep up, sex while pregnant is bound to be a little different than the sex you're used to. So before you dive right into bed with your partner, read up on all the things that happen to your boobs during first trimester sex, so that you know what to expect. Because some of the stuff that happens is seriously unexpected.