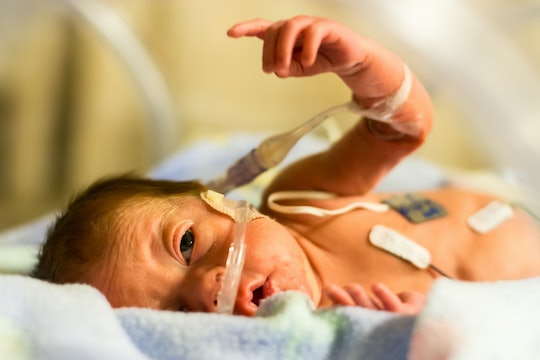 What To Expect When Your Baby Is In The NICU

Going into labor has to be one of the most intense and stressful times in a new moms life. Although giving birth can be a blessing, it can be fraught with fear and unknowns. I distinctly remember my mom coming home from the hospital after giving birth to my brother, and him not being with her. When I asked why, she told me that he had to stay in the NICU and explained some things that happen when the hospital puts your baby in the NICU.

My mom, who assured me that everything would be OK, revealed to me that babies who are put in the NICU, or Neonatal Intensive Care Unit, after birth are there because they need a little extra care. Later, I learned that it was because the doctors saw a potential issue with my brother's health and wanted to keep him under supervision for a little while longer. Though I didn't really understand what was going on, I knew that he was in good hands and just couldn't wait for him to get home.

So, if you're just as curious as the 5 year old me was, here are five things to remember about what goes down in the NICU.

More Like This
A C-Section Actually Doesn't Take As Long As You Think, According To Experts
24 Beautiful Baby Names With The Same Vibe As Mila
18 Baby Names To Use If You Like The Name Evelyn
These Darling Baby Boy Names All Start With The Letter "D"