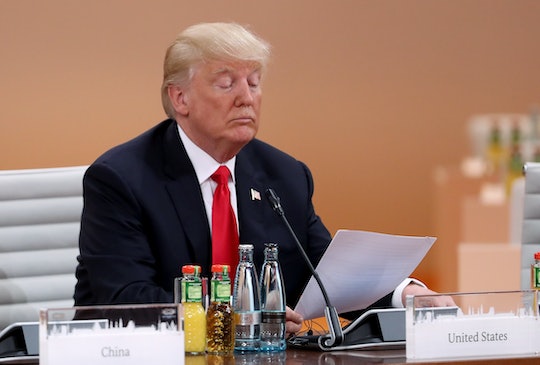 On Thursday, Politico reported that White House Chief of Staff John Kelly has instituted a new policy limiting the type of information staffers will provide to President Donald Trump. "External policy documents, internal policy memos, agency reports and even news articles" must now be approved by Kelly personally before being handed over to Trump, according to the site. It kind of makes you wonder what else Kelly won't allow Trump to see.

Other administrations have followed a similar process in order to ensure that the president gets a fair and balanced view on the issues, and in fact, Kelly's predecessor, Reince Priebus, attempted to keep up the tradition, but his authority was largely ignored. In May, Politico reported that Priebus had become frustrated with aides secretly slipping Trump printouts of fake news reports and internet hoaxes in order to manipulate him like a bunch of real-life Littlefingers. Now that Kelly's cracking down, does that mean an end to the Propaganda Document? According to Vice News, the White House staff is required to deliver a 20-plus page folder full of Trump-positive news chyrons, tweets from supporters, and flattering photos to Trump twice a day in order to keep him docile. Without any fake news or ego-boosting collages, what's Trump supposed to look at all day? Definitely not these things:

Internet darling Fiona the hippo is getting her own show on Facebook, but Kelly won't let Trump watch it until he balances the budget and apologizes to Kim Jong-Un for trying to get him in trouble. Screen time is a privilege, mister, not a right.

Buddy. I know you don't actually read the news yourself, but I've got to wonder, did your staffers somehow miss the thousands of articles warning Americans not to look directly at the sun during Monday's eclipse, or did you just crumple up the printout and throw it away because your name wasn't mentioned in any of the headlines?

Staffers have been instructed to tell Trump that Saturday Night Live was canceled due to poor ratings, Alec Baldwin threw himself into a volcano when he heard the news, and NBC now airs nothing but reruns of Celebrity Apprentice 24 hours a day.

"I don't care if you're in love," Kelly definitely might have shouted at Trump, "He's a terrible influence, and I refuse let you get pulled down with him! You should be up in your room studying and thinking about your future!"

The man only gets fives hours of sleep a night; the last thing he needs is for them to be full of nightmares.

Who knows, maybe with all this downtime, Trump might decide to do a little catching up on science, medicine, history, politics, and etiquette. Stranger things have happened.