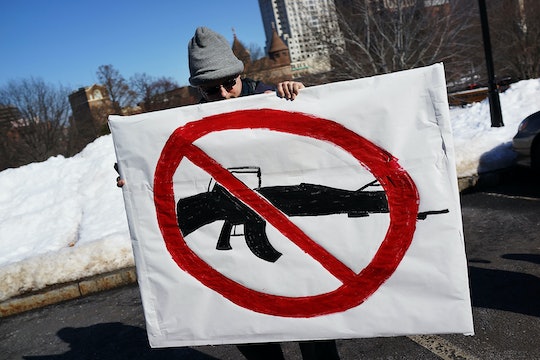 5 Things You Can Do Now To Support Gun Safety

In January 2013, 15-year-old Hadiya Pendleton was shot and killed at a Chicago park after being mistakenly targeted by a member of a local gang. Following her death, her friends encouraged their classmates to wear orange in her memory, but the move has since evolved into something much bigger: Wear Orange Day, a national movement against gun violence. On June 2 — National Gun Violence Awareness Day, and also Pendleton's birthday — people across the country will wear orange to highlight the fact that more than 90 Americans are killed by gun violence every day, according to The Brady Campaign to Prevent Gun Violence. Find that statistic totally horrifying? Here are five things you can do to support gun safety that go beyond just wearing orange clothing.

While news of any shooting death is tragic, those involving children — like Pendleton's, or the 2012 mass shooting at Sandy Hook Elementary School in Newtown, Connecticut — feel especially devastating. Yet they are much more common than people may realize: according to The Brady Campaign, 48 children and teens are shot each day on average, and seven of them die as a result. But gun violence is also a widespread problem overall: according to Everytown for Gun Safety, the gun homicide rate in America is roughly 25 times that of other developed nations — about 12,000 per year on average.

Research suggests that merely having access to a gun increases the likelihood of gun homicide. According to Everytown, unintentional shootings involving children occur, on average, about once every 34 hours — mostly due to the fact that "more than two million American children live in homes with guns that are not stored safely and securely." And the risk is also high for American women living in situations where domestic violence occurs. If there is also a gun in the home, she is five times more likely to be shot and killed.

The debate about gun ownership in America is a controversial one, with strong opinions held on both sides. That's not likely to change anytime soon, but National Gun Violence Awareness Day is an important reminder that we don't have to agree on gun rights to be able to come together to stand against gun violence. And if that's a cause you want to support, you have plenty of options:

Wearing orange on June 2 might not magically solve the gun violence problem in America, but it can make a big impact as far as getting the message out to others. And it definitely seems to be working: on Friday, #wearorange became a trending hashtag on Twitter, with countless users — including many politicians and celebs — sharing photos of themselves wearing orange for gun violence awareness.

Want to go a step further? WearOrange.org has a feature that will allow you to create a custom #wearorange image perfect for sharing on social media. The orange overlay includes the #wearorange hashtag, and also allows you to note why you've committed to wearing orange that day.

Go To An Event

In addition to the online awareness campaign, more than 250 Wear Orange events are scheduled to take place across the country Saturday, according to CBS News. They include everything from marches and rallies (including one across the Golden Gate Bridge in San Francisco, and another across the Brooklyn Bridge in New York City), while candlelight vigils, breakfasts, family dinners, and picnic lunches have also been planned in other cities and towns. A full list — searchable by zip code — can be found here.

Don't live near a Wear Orange event? You can help support the cause by purchasing Wear Orange merchandise at the Everytown for Gun Safety online store. Money raised by Everytown helps to support the group's work to raise awareness about gun violence, improve gun laws, and educate the public about responsible gun ownership.

Get Involved In Your Community

Raising awareness about gun violence on June 2 is important, but it's a cause that should really be supported all year long. One way to do that? Consider joining your local chapter of a gun safety advocacy group, like Moms Demand Action for Gun Sense in America — a "nonpartisan grassroots network" of Americans who help push for change from legislators, businesses, and schools.

Chapters of Moms Demand Action now exist in every state — and you don't have to be a mom specifically to join. To be connected with your local chapter, visit the Moms Demand Action website, and fill out the form for more information.

Awareness is super important, but if you want to support actual legislation for gun safety reform, getting in touch with the member of Congress who represents you can make a big difference. Not sure who it is? You can search for your representative online. If you're unsure of what to say, Americans for Responsible Solutions has a script (and if you fill out the web form, you'll actually be automatically connected to your senator). Phone calls not your style? Everytown has a page that will make it easy for you to tweet at your representative about gun safety.

Even better than using a script or a pre-written tweet though would be to actually research the issue and write your own message. Groups like Everytown, The Brady Campaign, and Moms Demand Action have lots of good information on their websites, and the non-profit Gun Violence Archives is another helpful resource for statistics on gun violence in the United States.

The fact that gun violence continues to be such a major issue in America is heartbreaking. But days like Wear Orange Day are a reminder that there are lots of things that everyday people can do to push back against the awful statistics. And while supporting gun safety may not bring back the lives of innocent victims like Hadiya Pendleton, working to protect the lives of others seems like a pretty powerful way to honor their memories.