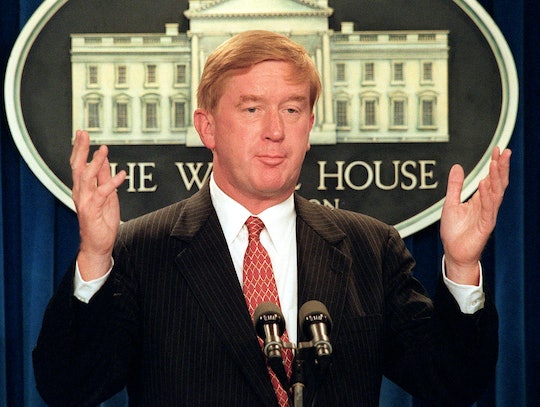 Forget about Clinton and Trump; Forget about Democrats and Republicans. It is hard to do that these days, but there might be one more presidential ticket worth knowing. This year, Libertarian Gary Johnson is in the running for the White House, and his campaign might be worth familiarizing yourself with. With this crazy anything-can-happen (and anything will happen) election cycle, you might just be hearing more about Johnson and his running mate in the coming weeks. In order to get familiar, here are five things you need to know about Bill Weld, Gary Johnson's running mate.

Just how familiar should U.S. voters become with the Libertarian ticket? According to CNN, Johnson and Weld are polling at 13 percent in battleground states. On June 26, according to NBC, Johnson and Weld were polling 10 percent nationally. This is major, considering the third party ticket has not been included in debates or received as much TV time as the other candidates. Heck, even Gary Johnson himself thinks that this political election has been strange.

Luckily, there are resources out there on the internet where people can learn about the third party candidates, what they stand for (if they do get close to becoming the next vice president), and the people they've chosen to associate themselves with, like Weld, in this case.

1. He Is The Former Governor Of Massachusetts

Weld served two terms as Massachusetts governor as a Republican, once in 1990 and again in 1994. According to Johnson and Weld's website, Weld managed to accomplish quite a bit during his time in office. As governor, Weld was able to cut taxes 21 times and lower the unemployment rate. Quite impressive. He also led several trade missions across seas during his time in office.

2. He Doesn't Have The Kindest Thoughts About Trump's Plans

In May, Weld told The New York Times that Trump's plan to remove 11 million immigrants from the United States reminded him of Kristillnacht, likening Trump's actions to the Holocaust. "I can hear the glass crunching on Kristillnacht in the ghettos of Warsaw and Vienna when I hear [Trump's plan], honest." Weld said.

Here's a fun fact uncovered by Newsweek: Weld has been friends with both Hillary and Bill Clinton for quite some time. According to Newsweek, Weld and Hillary both worked together on the House impeachment committee in 1974 and almost worked for Bill during Bill's presidency in 1997. Weld has also gone on to say that he does not believe Hillary is in the wrong or should be punished for her emails. Some experts worry that his closeness to the Clintons could be a problem other Libertarians.

4. He Believes His Ticket Could Be The Solution To Voters Disillusioned By Trump

Weld is hopeful that the Johnson/Weld ticket is a solution for those who don't side with Clinton or Trump. And he does make a good point — both Johnson and Weld ran for Governor and won as Republicans in largely Democratic states. "There are a lot of people who could find our message appealing," Weld told U.S. World News and Report. "Realistically, we've got to raise tens of millions of dollars to show we can be competitive on the national level...if that happens, you'll see us creep up in the polls."

5. He Barely Won The Vice-Presidential Nomination

It is about time to everyone familiarizes themselves with both Johnson and Weld, as voters will be hearing their names for the next few months to come.