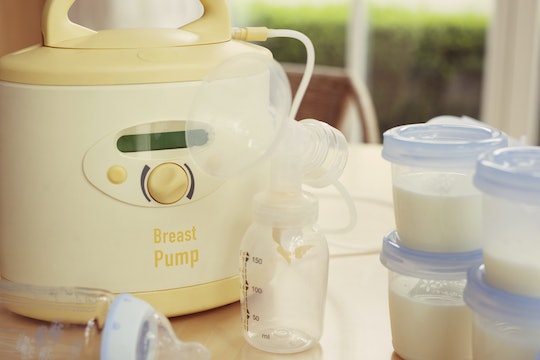 If you're hoping to increase your milk supply, you've probably considered trying your hand at power pumping. The method, meant to mimic the way a baby cluster feeds during a growth spurt, is one many moms swear by for increasing and regulating your milk supply. However, despite it's success, power pumping isn't always the most fun hour of a mom's life. In fact, there are some pretty weird things your body does while power pumping that might freak you out a little bit. Or at least make you roll your eyes at yet another bodily change

More Like This
Here's The Deal With Babies Who Sleep With Their Eyes Half Open
30 Vintage Photos Of Parents Giving Their Babies A Bottle
Um, "Rusty Pipe Syndrome" Is A Thing, & Every Breastfeeding Mom Should Know About It
What You Need To Know About Sunscreen For Your Baby

Breastfeeding in itself brings on enough changes (not to mention the ten months of constant change that is pregnancy) to make a woman crazy, and power pumping only adds fuel to the flame. For many moms though, it's an incredibly effective way to give their supply a boost, whether you're struggling with a true low supply or just want to get a head start on pumping a stock pile for a trip sans baby. If it works, it is well worth the extra effort, and according to the Fed is Best Foundation, when moms follow the "rules" of power pumping, it most definitely will work, in spite of the following semi-strange things it does to your body.