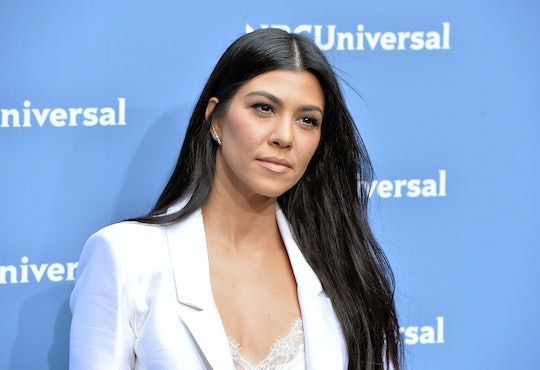 Kourtney Kardashian is the oldest Kardashian sibling and might be the most experienced at handling the hate. The mom of three is used to critics — whether they're from her Instagram followers, viewers of her family's reality show, Keeping Up With The Kardashians, or members of her own family, Kardashian is a pro at handling whatever is thrown at her. By looking at the times that Kourtney Kardashian fought back against mom shamers, it's easy to see that she doesn't let the critics get to her.

Since KUWTK has been on air for 11 years now, the Kardashian siblings know what it's like to receive some judgement. Kourtney, Kim, and Khloé Kardashian have received all kinds of hate throughout the past few years, especially now that they're moms. And Kourtney in particular understands this the most, especially when it comes to her life as a mom. She gave birth to the first Kardashian grandchild, Mason, which not only means that she has been a mom the longest out of her siblings but she has had more time to be mom-shamed.

As the mom to 8-year-old son, Mason, 6-year-old daughter, Penelope, and 4-year-old son, Reign, Instagram commenters are super vocal about Kardashian's parenting flaws. But Kardashian is incredible at clapping back and addressing these haters who seem to find a problem in everything she does.

These are just a few examples of all of the times she shut down the shame.

The Time She Took A Vacation

There is a lesson that most people learn the hard way, and that lesson is to never doubt a Kardashian. In October, the mom of three shared a super gorgeous photo of herself relaxing by a pool. "Sometimes you need a day away," Kourtney captioned the photo.

While she received mostly positive comments, some people had a problem with the caption, according to E! News, pointing out that she "never works" so she would have no reason to need a day away. Kourtney, of course, took major offense to this — and her clap back in the comments was incredible:

Let me respond to you with all the time I have...oh wait, my attorney's on the other line to discuss six business deals, I have a camera in my face filming season SIXTEEN of KUWTK (you may have heard of it) and I'm raising my three amazing children...God bless you and your worry about me.

Yes, she went there.

The Time She Didn't Include Her Kids In A Photo

Kourtney loves spending time in bikinis while on vacation — but she obviously knows how to balance this hobby while taking care of her three kids. People should know this by now.

While on vacation in July, Kardashian shared this adorable photo of herself eating from a basket of bread. But instead of wondering what kind of bread that Kardashian was eating, some commenters were more concerned about Kardashian's kids, according to StyleCaster. "Where are your kids," one commenter asked.

Kourtney had the perfect response. "My son was taking the photo and the other two were sitting at a table in front of me," Kourtney commented back. "Thank you so much for your concern."

Kourtney's kids are going to be amazing photographers in the future. Just look at that skill!

The Time She Had A Night Out

Last summer, Kourtney was reportedly super angry after getting mom shamed for going out too much, according to HollywoodLife. After Kourtney was spending a lot of time vacationing with her then-boyfriend, Younes Bendjima, people were concerned that she was spending too much time going out and not with her kids. This reportedly made Kourtney very upset, clapping back (in private) to all of the hate she had been getting.

"Kourtney is kind of shocked by all the mom-shaming and kind of upset," a source close to Kourtney told HollywoodLife. "She's an amazing mom, and has pretty much been a single mother for the past few years, so why the heck shouldn't she be allowed to get away and enjoy some 'me time' for a few days?"

The source is right — Kourtney shouldn't have to defend herself for going on vacation or taking some time for herself, especially since she is such a devoted mother.

The Time Someone Asked If She Was Pregnant

Since Kourtney is such an awesome mom, it makes sense that people would want her to have more kids. But everyone knows that it is pretty rude to ask a woman if she is pregnant, especially if she hasn't said anything about being pregnant — and Kourtney doesn't take these comments lightly.

After Kourtney's sister, Kendall Jenner, posted a group photo of her family on Thanksgiving (where Kourtney had her hand on her stomach), one person took to the comments to ask the worst question — is Kourtney pregnant? But Kourtney, of course, had the best response, clapping back at the rude commenter, according to Glamour.

"No, but how good does my arm look in the last photo?" Kourtney asked in reply.

That reply was simple and classy, just like Kourtney.

The Time She Didn't Respond At All

Sometimes the best way to respond to the hate is to not respond at all and Kardashian has done just that the majority of the time. Whenever anyone decides to shame Kourtney, she knows that sometimes, the best response is to not say anything at all, according to CafeMom. Silence is powerful, and by not saying anything all the different times she has been mom shamed (and she's been mom shamed a lot), it speaks volumes.

No matter what Kourtney is being mom shamed for, she has proved that she can handle it with grace and ease.