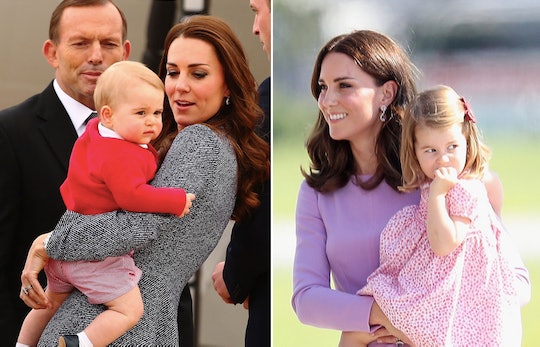 One of the cardinal rules of celebrity status in the United States is not to wear the same thing twice. After all, what better excuse than the public eye for a constant supply of new clothes? But in Great Britain, there is one very notable exception to this rule: Kate Middleton. The mom of three is a master at recycling her own clothes and, in fact, that of her children as well. If you're not convinced, here are five times the royal kids wore hand-me-downs, and probably — no, definitely — didn’t even know it was a big deal that would garner media attention.

Middleton is a real pro at using her entire closet, but she has a few favorite outfits that she loves to wear again and again. In fact Harper’s Bazaar noted some 78 times that she’s worn outfits more than once, some of them several times to a variety of functions. The fact is she always looks impeccably styled, so she can get away with a lot in terms of her appearance.

But she’s just as frugal about her kids’ clothes, as noted by The Mirror, which makes a lot of sense since they are outgrown so quickly. And with three kids, she’s been able to do due diligence twice now, so clothes that showed up on Prince George and Princess Charlotte are likely to be seen again on their little brother, Prince Louis!

When Two Was Better Than One

In a photo released May 5, 2018, little Princess Charlotte is shown kissing her newborn brother Prince Louis on the head. It’s a sweet capture, but just as notable was the fact that both the children were wearing hand-me-down outfits, according to TODAY.

Princess Charlotte sported a blue cardigan that her older brother Prince George had been seen in for a birthday portrait with his great-grandmother, the queen. And Prince Louis wore a white onesie with a sweater that Princess Charlotte had worn in a similar photo with George when she was a newborn, according to TODAY.

In a photo released of the Cambridge family’s 2018 Christmas card, the parents and their children pose against the trunk of a tree, according to The Mirror. While Prince George looked positively grown-up in jeans and a green sweater, Princess Charlotte looked familiar in what must be a favorite clothing item for her: the same blue cardigan that used to belong to Prince George.

It’s matched with a navy blue skirt and white shirt. In the Christmas photo, Prince Louis leans against his mom in blue pants and a gray sweater and some astute observers noticed he’s also wearing something that belonged to Prince George: his shoes. The pair of blue side-snap shoes were worn by The George on a visit to the Sydney Zoo in 2014, according to The Mirror and The Guardian.

In 2016, when Princess Charlotte was just starting to toddle around, she was spotted several times wearing clothes that had belonged to Prince George, according to Hello! Magazine, which reported that one of the outfits she was captured in a photo wearing was a red and white striped romper paired with a white shirt. Prince George had previously worn the outfit during his first tour overseas, in Australia, the outlet reported.

In another moment, as Hello! Magazine reported, Princess Charlotte gazed at the camera dressed in a sweet blue dress with a white cardigan sweater that her big brother previously rocked as a baby.

Even Dad Prince William Got In On It

Since Prince George was the first born of the Cambridge children, it would seem like he’d be exempt from having to wear recycled clothes, but not so. According to the Daily Mail, the young prince was dressed more than once in clothes that were decades old, handed down from his father.

Once was at the Trooping the Colour ceremony in 2015, according to TODAY, when he wore a baby-blue romper that his father had worn to the same ceremony back in 1984.

So Did An Uncle

But Prince William’s old clothes aren’t the only ones that have been pulled out of the closet. On a 2017 trip to Poland, royal watchers were enamored of photos of Princess Charlotte giving a little wave in a floral-print red dress. Her shoes also caught eyes, and The Sun reported that people hoping to buy them were disappointed at being unable to find them in stores. That’s because they had originally belonged to Prince Harry, according to Good Morning America, who wore them in a photo with his mom dad and in the early 1980s.

It only makes good sense for the family to be reusing all these clothes again and again since they’re apparently kept around forever.

More Like This
Kate Middleton Is Hosting Her Annual Star-Studded Christmas Carol Service
Meghan Markle Wore Lilibet On Her Chest As She Fed Chickens At Their California Home
Elon Musk Shares New Photos Of Son, X, With His Own Twitter Badge
Mariah Carey Says She Has Never Called Herself The “Queen Of Christmas”