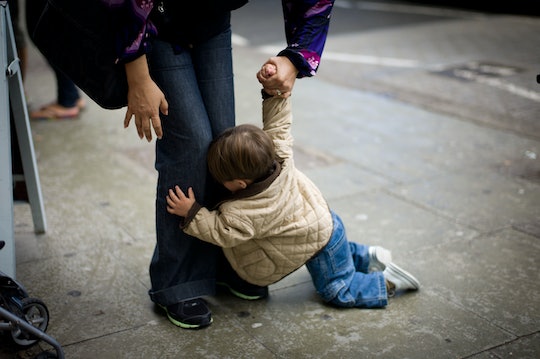 Robin Burcell spent 12 years as a hostage negotiator in Lodi, California. Now an award-winning author (Burcell's latest book, The Last Good Place, is available now), Burcell raised three girls while simultaneously serving on the Lodi police force as a negotiator, a police officer, and a detective, and still insists that handling little ones is more difficult than dealing with criminals. "Unlike toddlers, you get to tell the crooks what to do," she says, laughing.

She makes a strong point, and she’s not alone. A search for “baby tantrum” on YouTube brings up about 230,000 results. Though each child is undoubtedly its own special snowflake, it would seem that many parents face similar situations thanks to their own pint-sized perpetrators.

Although I (hopefully) still have a couple of years until my baby reaches this fun stage, when I was 17 I worked as a day camp counselor, in charge of the youngest group, appropriately named "The Shrimp." The Shrimp were a rambunctious and adorable group of 2 and 3 year olds. There was one tiny crustacean who did the same thing every day right before swim time: She refused to put on her swimmies (arm flotation devices), and would threaten to poop if I made her wear them. Her parents had given me strict instructions about said swimmies, and the camp had an even stricter policy about diapers in the pool, which left me with zero room to negotiate. And, yet, every day this cute little girl would scream “NO!” at me as I tried to wrangle at least a single swimmie on before she’d make good on her threat to poop in her swimsuit, and I’d have to change her into the spare one her parents always thankfully provided. As a new parent, I think about this scenario often and now realize two things: that child ate way too many carrots and, more importantly, dealing with a toddler who wants to get their way must be similar to what police crisis negotiators go through. Which is why I thought, Who better to ask for toddler tantrum tips than someone who's been professionally trained to diffuse pressure-filled and often hostile situations?

With this in mind, I gave Burcell five scenarios I think all parents of toddlers have faced at one time or another, and asked the professional how she would negotiate each.

Michael insists he didn't eat a cookie, and, yet there are crumbs all over his face that he doesn't know are there. How do you handle?

“Get the camera and take a pic,” Robin answers immediately. “Getting your camera gives you a moment to take a break and not lose your cool.” It’s probably also a good idea to grab a cookie for yourself at this point.

Robin says to then ask Michael if he ate the cookie, and if he insists he didn’t, show him the “evidence.” If he still denies eating the deliciousness, then you should utilize two of five steps that her negotiation training taught her:

Active Listening and Building a Rapport: Perhaps Michael thinks you’re asking if he ate the cookie in that moment, but he actually ate it an hour ago and so he is not aware of the fact that he’s lying. By asking him questions and listening to his responses, you’ll eventually build a rapport that should help him admit that he ate the treat in question. Not to mention you'll then have a picture you can hold over his head later, say, when you’re meeting his first ever girlfriend or boyfriend.

Sabrina initially says she's tired, but when you go to put her down for a nap, she’s acting more wired than you would get off a Trenta-sized Starbucks latte and announces in a sing-song voice that she’s NEVER going to sleep. It's obvious she needs to ride the train to Slumberland, so how do you get her on board?

Another step of Robin’s negotiation training is:

Empathy: which she says you should start with for this scenario. Tell Sabrina something like, “When I’m tired, it really helps if I lay down.” This will also build what Robin refers to as “naptime rapport.” But watch your tone of voice, Robin warns. If your child’s pitch is going up as she’s insisting she’s no longer sleepy, then the parent needs to calm their voice by going low and slow.

She insists: "A parent’s voice is going to be the biggest tool they have."

You can then better direct the negotiation from there, and in Sabrina’s case, keeping her calm and helping her feel understood will encourage her to lie down. Once she’s there, hopefully it’ll be all aboard the Sleep Train long enough for you to have a glass of wine.

Tommy took Sara's toy but insists that Sara told him he could have it. Sara says she never said that. How do you negotiate? “Separate and get statements from both kids because quite often if you’re interviewing both the ‘victim’ and ‘suspect’ together, one statement can influence the other,” Robin says. Which brings us to our next lesson:

Active Listening and Empathy: Ask Tommy if it’s possible he misunderstood Sara and vice versa. Robin also warns against using an accusatory tone when interviewing either party. “You don’t want to be one-sided. You want to remain completely neutral, yet still show empathy to the person you’re interviewing.”

After you’ve interrogated each party, Robin says you can then bring them back together, but make sure to give them each validation. If neither side is budging, then ask Tommy (again, being mindful of tone) why he thought he could have the toy. Asking him an open-ended question instead of a yes or no one will force Tommy to come up with a concrete answer, which should help clear up the misunderstanding.

That is until Tommy and Sara one day marry later in life and have this same argument over Chinese leftovers.

Maggie has already had one cupcake and you told her that was the only one she can have. Naturally, she says she wants another cupcake (I feel you, Maggie), and when you say no, she threatens to defy their very name and push her Pull-Ups down and go on the floor. Since she is in the middle of potty training, she knows this is a huge no-no.

“Hostage negotiators know that threats and ultimatums on either side are never going to work,” Robin says, adding: "In fact, ultimatums are the worst-case scenario."

Instead, to take a step back and actively listen to what you’re child is trying to tell you. Is it that they actually want another cupcake or are they hungry? Consider the answers to these questions before reacting. Then redirect the ultimatum and tell Maggie that you’re not going to allow her to pee on the floor. Pick her up, put her on the toilet, and remind her that this is the only place you’re going to allow her to do her business.

Unless you want to send her to my once tiny crustacean’s house where perhaps karma will finally prevail.

It’s the day before Christmas, and you’ve already spent an hour in the grocery store when all you had gone there for was butter. Because the universe is absolutely against you, the only aisle open has all the candy right by the register. Your daughter, Madison, eyes a toddler-sized chocolate and proceeds to demand the huge bar. Ten people have miraculously already lined up behind you. You've seen this look in Madison's eyes and you know you have T-minus five minutes to meltdown. But you also know it's dinner time as soon as you get home. What do you do, Jack? What do you do?

Make ample use of your negotiating voice in this situation. The higher their voice is, the lower yours should be. Robin warns: "Whatever you do, don’t lose your cool."

Reminding, "Not only is it not good for Madison, but then you’ll feel like crap and may have a meltdown, too." Instead, she says to take a deep breath and use the empathy strategy before redirecting from the candy bar. You could say something like, “I want that candy bar, too, but we can’t have it because we have dinner at home, and if we don’t get the butter home then it’s going to spoil. If it spoils then I can’t use it to make dinner.” By empathizing and then giving Madison something else to focus on, you’ll be able to move on to another step: influence. Once you’ve employed the building a rapport strategy — in this case by redirecting her toward the common goal of "saving" the butter — then you can influence her behavior because you’ve earned her trust. This should lead to the final step:

Behavioral Change: which is the ultimate goal for all crisis negotiators. Robin’s final bit of advice is to practice maintaining your cool and employing the various steps (Active Listening, Empathy, Building a Rapport, Influence, and Behavioral Change) when there really isn’t a dire situation, so that way when you find yourself in the candy aisle of life, you’ll be able to handle all negotiations like a pro.