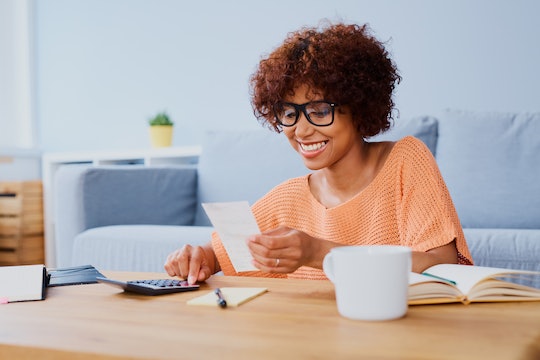 Millennials have a terrible reputation. Older generations loathe them for their work ethic, their refusal to buy homes in the name of Instagrammable food, and their attachment to their phones. But, listen, all millennials are not the same, especially when it comes to gender. According to a new study done by Earnest, a student loan startup, Ipsos, an independent research company, and Amino, a health care transparency company, there are actually a lot of ways that millennial women are better at "adulting" than their male peers. It's not that men are not good at being grownups at all — they have a strong showing in some categories — but, as the data shows, women are just better at it.

All of this might have to do with the fact that according to the most recent U.S. Census Data, more women than men have college degrees. Not that higher education is everything — there are still wealth gaps between rich and poor college grads — but it does put a person at an advantage in the job market.

And with that in mind, a higher education also means a steady income, which turns into having to learn how to responsibly handle those finances. Basically, as it is right now, millennial women are learning to get their acts together a little quicker than men are. So when it comes to being an adult, here are just a few ways women are superior.

They Pay Their Taxes

Or at least are managing their own tax responsibilities instead of farming the job out to an accountant or capable parent. According to the Earnest survey, 75 percent of women manage their own taxes opposed to just 52 percent of men.

They Have A Steady Job

The same survey also found that 65 percent of women were holding down a steady job, though the researchers didn't clarify how they defined "steady." Whatever it was, only 53 percent of men had the same perk.

They Move Out Of Their Parents' House

This one had the biggest gender difference. According to the Earnest findings, 79 percent of women had moved out of their childhood home, while only 56 percent of males did.

They Buy Their Own Cars

Many experts complain that millennials have changed the economy by shunning car leases and home mortgages, but this study found that of the millennials that are driving — 72 percent of women had bought or leased their own car and only 52 of men had done the same thing.

They Pay Their Student Debt

Does this mean that we can drop the term "adulting" for good now? For many, it's a way to infantilize the experience of adult women — as if paying credit card bills and figuring out taxes was something so beyond their grasp. In reality, this study shows that both women and men are doing pretty good at creating financial security for themselves. Just, the women are doing it better. Sorry, dudes.

More Like This
Meghan Markle Spent Her Thanksgiving Volunteering For A Cause Close To Her Heart
Over 10,000 Sippy Cups & Bottles For Toddlers Recalled Due To Lead Poisoning Hazard
14 Baby Names Inspired By 'The White Lotus' That Deserve A Round Of Aperol Spritzes
Exclusive: 'Firebuds' Dives Into Hanukkah Traditions In Festive New Episode