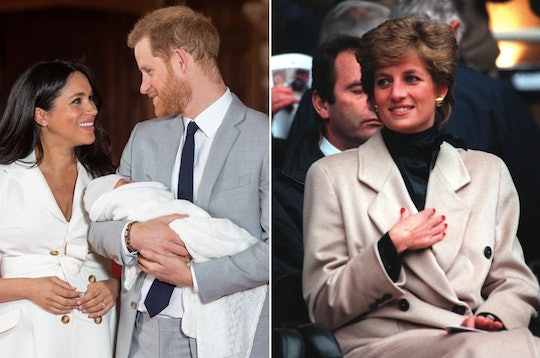 Now that Meghan Markle and Prince Harry have welcomed their first child, a son named Archie, into their lives, all eyes are on the royal couple as they enter parenthood. Many have taken a stab at guessing what kind of parents the two are likely to be and how the couple will, or won’t, continue royal traditions with the newborn's arrival. If history is any indication, all the ways Prince Harry has honored Princess Diana, his late mother, suggests that he'll be a devoted, thoughtful, and sentimental father to his son.

From sentimental tokens to symbolic representations, Prince harry has had a history of honoring his late mother. Whether it has been at wedding ceremonies or holidays like Mother's Day, Princess Diana's memory has always been present for the Duke of Sussex in one way or another. Although the royal family lost the late Princess to a fatal car accident back in 1997, her memory has been ever-present, especially for her youngest son, who reportedly still mourns the People's Princess' tragic passing. Since then, the Duke of Sussex and new father has been vocal about mental illness and mental health awareness, even going so far as to making a documentary in collaboration with Oprah to tackle the stigma surrounding the issue.

But there are still many other small gestures Prince Harry makes to honor his mother's memory, and here are just a few of them: