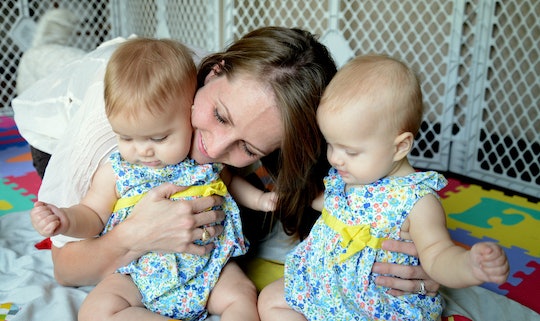 5 Ways To Advocate For Paid Parental Leave, Because It's Time To Really Put Families First

The United States is one of only eight countries in the world — and the solitary so-called "high-income" country — that does not offer some kind of paid leave to new mothers and fathers. This lack of support is bad for women, bad for children, bad for families, and bad for the economy. New fathers are offered paid leave for newborns in 81 countries throughout the world, according to research from the Institute for Women's Policy Research. Paid leave isn't a new idea and is working across all sorts of countries all over the globe. So what are some ways to advocate for paid parental leave right here in the U.S.? There are so many small ways you can help propel the issue forward.

Most families don't have to look very far to see examples of the stress that comes from juggling a new baby, dealing with of the new expenses a child brings, and trying to learn to balance work and family time. In fact, according to Pew Research, 40 percent of American households with children under 18 years old rely on a woman as the primary breadwinner. Protecting a woman's income when she needs to take time off after a new baby is protecting the family's financial stability. And most Americans understand that.

In fact, according to a Nov. 2015 poll from YouGov and Huffington Post 69 percent of Americans think employers should be required to provide paid maternity leave. With that much support, paid leave should be a no-brainer, right? Not so fast. Legislation that would provide paid leave is being fought by leaders of the Republican party, including it's current standard bearer, House Speaker Paul Ryan, who famously pushed to create plenty of time for his own family when he took on his new leadership role, and yet he refuses to afford the same benefit to the parents he represents.

So now it's up to everyday Americans to shame elected officials who oppose paid leave and throw their support behind those who are working to make it a reality, and here's how they can do it.

1. Learn About The Issue

Get the facts about the benefits of paid leave and familiarize yourself with the options you have available, from the federal Family Medical Leave Act to state laws on parental leave including California, New Jersey, and Rhode Island, which offer paid family leave.

2. Vote For Candidates Who Support It

Support and cast your ballot for candidates who support passing paid family leave legislation — both in the presidential election and at local elections. Both presidential candidates, Secretary of State Hillary Clinton and Vermont Sen. Bernie Sanders have spoken out in strong support of paid leave, and New York Sen. Kirsten Gillibrand has been trying to pass the Family And Medical Insurance Leave Act in Congress.

Give money to support candidates and grass roots organizations like the National Partnership for Women & Families who are working to secure paid parental leave for all Americans. Currently, only 13 percent of U.S. workers are eligible for paid family leave.

4. Give It To Employees

If you're an employer, offer your workers paid parental leave. Simple as that.

5. Speak Out About Why It's Important

Talk to your friends, family, and coworkers about the benefits of paid parental leave for everyone. Open up a dialog on Facebook (yes, be that person) and spread the word about how far behind the U.S. really is when it comes to helping parents and families.

One mother, Amber Scorah, generously shared her own heartbreaking story about her baby Karl, who died in daycare on her first day back at work. It's personal stories like these, and the ones we live ourselves, that will eventually convince enough Americans that paid leave needs to be a priority and something we all need to fight for.

More Like This
Ginger Zee Had A Perfect Response After A Troll Asked Her "Who's Raising Your Kids?"
It's A Beautiful Day In Jenny Slate’s Neighborhood
Family Of Grandfather Killed In Highland Park Mass Shooting Say He "Saved" Their Lives
The FDA Is Warning Parents To Not Use Baby Neck Floats After One Infant Died