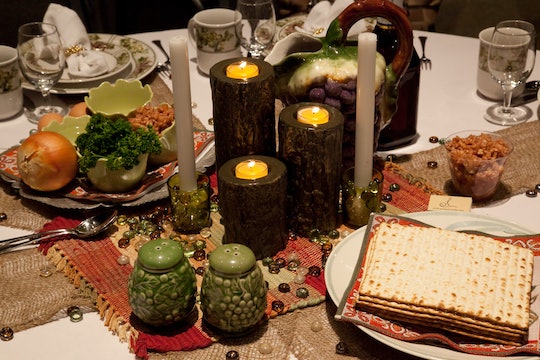 5 Ways To Have A Feminist Passover & Empowering Seder

Grab your matzah and Manishevitz, because Passover is almost here. The yearly spring Jewish holiday commemorates the ancient Israelite’s freedom from Egyptian slavery. Yet, it also has the power to acknowledge how far the Jewish community has to go. In many communities, women fully participate in synagogue life, whether it be on the pulpit as rabbis and cantors, in synagogue leadership, or contributing to the cannon of art, literature or music. But even those who are inclusive don’t always remember to acknowledge the connections between feminism and Passover. This year, try to find ways to have a feminist Passover Seder that are intentionally and unapologetically empowering.

Now, that's not to say that a feminist Passover would be something super groundbreaking. According to Tablet Magazine, The first feminist Passover seder was held in Haifa, Israel, in 1975 . Since then, women-only seders have become a staple of synagogue sisterhoods. But no matter the people gathered around your table, your Passover can include feminist elements like an orange on the seder plate, a goblet filled with water, and even a Beyoncé playlist. This year, while you’re mastering your Bubbe’s brisket recipe, check out these five ways to give your Passover Seder a feminist makeover.

More Like This
The Best Black Friday 2022 Deals For Moms
10 Thanksgiving Desserts That Aren’t Pumpkin Pie
20 Holiday Gifts For Neighbors They’re Sure To Love
Store-Bought Meals Didn’t Ruin Our Holidays. They Made Them.