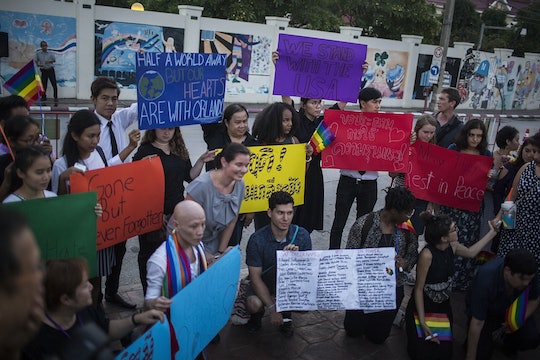 5 Ways To Honor The Pulse Victims With Action

It's been exactly one year since the tragic mass shooting at Orlando's Pulse nightclub left 49 people dead and more than 50 people wounded. Naturally, many have taken to social media to post tributes to the victims and honor their memories, but while those posts are certainly important, the truth is that they are only the beginning. Looking for ways advocate on behalf of those killed in the Pulse shooting? Here are 5 ways to #HonorThemWithAction on the Pulse shooting anniversary.

According to The Palm Beach Post, Monday has been officially designated as Pulse Remembrance Day in the state of Florida, and flags will be flying at half-mast in honor of those who were killed. But while the shooting understandably brought shock and sadness to Floridians — and especially to those in Orlando — the fact that the gunman chose to open fire at a well-known LGBTQ club on what had been "Latin night" meant that the shooting was particularly devastating for the LGBTQ and Latinx communities. In the aftermath of the massacre, it became clear that, Pulse had represented a much-needed safe space from inequality and bigotry, particularly among the young people who frequented the club. In part by using the hashtag #HonorThemWithAction in the lead-up to the anniversary of the shooting, advocates have been spreading the important message that there is still so much to fight for when it comes to equal rights. And that, really, it's not enough to just be sad if we really want to honor the victims' memories.

If you live near Orlando, one of the easiest ways to show your support of the victims and of the LGBTQ and Latinx communities is to attend an event. A number of events were planned ahead of Monday's anniversary to commemorate the day, according to TIME, including a weekend race in honor of the Pulse victims, as well as three separate memorial events at Pulse nightclub on Monday.

The Orange County Government also announced on its website that it would be flying the rainbow flag in solidarity with the LGBTQ community outside the government offices, and on Monday evening, Orlando community leaders and elected officials have planned a musical performance and memorial ceremony in honor of the Pulse victims at Orlando's Lake Eola Park Amphitheater. The Orange County History Center is also offering a public gallery display called the One Orlando Collection and Digital Gallery, which features "images of individual items collected at the Pulse memorial sites in their current state in preservation," and "artwork and international support that was received following the tragedy." Admission is free to anyone who wants to attend, and the display will run until June 17.

If you can't attend a Pulse memorial event, there are other ways to support the Orlando LGBTQ community on the anniversary of the shooting. In a joint collaboration between Pulse, the City of Orlando and the Orange County Government, Monday was designated locally as "Orlando United Day — A Day of Love and Kindness." The idea, according to the Orlando United Day website, is that those touched by the shooting would use the day to engage in community activities and come together with others in a show of compassion and unity. But it's not just something for those who live in the area.

According to the One Orlando Alliance, an LGBTQ advocacy group in Central Florida, anyone can easily get involved in the Pulse-inspired movement no matter where they live, simply by taking the opportunity to do something nice for someone else on Monday. That could be a random act of kindness throughout your day, or something more established, like volunteering in an organization in your community that supports LGBTQ rights

It would be nice to say that the outrage and outpouring of support following the Pulse shooting has meant that the rights of LGBTQ Americans have improved over the past year, but unfortunately, the opposite appears to be true. Tens of thousands of Americans marched for LGBTQ rights in cities throughout the country over the weekend, according to BBC News, in some cases swapping out traditionally-celebratory Pride parades for protest marches meant to push back against the administration of President Donald Trump and policies that target transgender rights, immigrants, and minorities. In addition to being the anniversary of the Pulse shooting, June has long been considered Pride month, according to NPR, but the president has yet to even acknowledge it publicly.

Want to get involved in LGBTQ rights advocacy? Groups like the American Civil Liberties Union or the Human Rights Campaign can be a good place to start. Ready to make your voice heard? Contact your representative and let them know that you think LGBTQ rights must be a priority.

Fighting for LGBTQ rights is a valuable way to honor the lives of those who were targeted for their sexual orientation (and to honor human rights in general). But the Pulse victims were also killed by a mass shooter who had been investigated by the FBI in 2009, according to The Washington Post, and yet who was able to legally purchase firearms only days before he killed 49 people. Pushing for legislation that would make it more difficult for a shooting like that one to ever happen again would be another way to ensure that something positive emerged from their deaths.

Like LGBTQ groups, groups that advocate for gun safety — like Everytown for Gun Safety, Moms Demand Action for Gun Sense in America, and The Brady Campaign To Prevent Gun Violence (who are also currently selling Orlando Unity t-shirts, and rainbow-themed "Disarm Hate" merch) — could definitely use your support. But once again, making your voice heard at the government level is also going to be key: by calling your representative and demanding action, you can help make mass shootings — not to mention the 90 shooting deaths that occur in America each day, according to The Brady Campaign — less likely to occur.

Unsure of what to say? Americans for Responsible Solutions has a script. Phone calls not your style? Everytown has a page that will make it easy for you to tweet at your representative about gun safety.

The anniversary of a mass shooting is a difficult day for so many reasons — not only is it a reminder of the innocent people who lost their lives, and all of the pain still felt by the people who knew and loved them, it's also a reminder that we live in a world where things like mass shootings in nightclubs can, and do, totally happen. It can also be frustrating to try and actually do something about it, because it means taking a hard look at things like hatred and inequality, and at politicians who aren't taking the issues as seriously they should be. But even though all of those things are true, it's still important to push for change.

Sharing a heartfelt tweet, or taking time to remember the victims might feel like it's enough, and it's still valuable to do that. But by taking the inevitable sadness and heartbreak that comes from remembering the Pulse shooting, and using it advocate for greater rights and safety? That's really what honoring the victims is about.