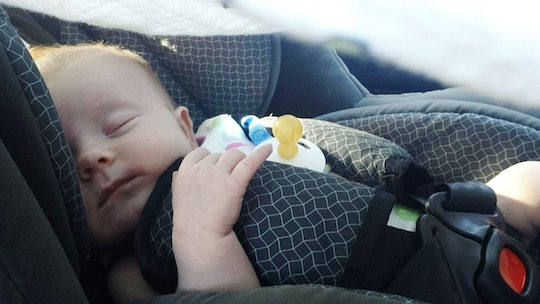 Tragedy strikes again: this past weekend, a 6-month-old boy died after being accidentally left in a hot car for hours. His dad had forgotten to drop his son off at daycare and went straight to work after 6 a.m, realizing his mistake when he got off the job at 3 p.m. We all make mistakes, and most of the parents who have forgotten their kids in the car are good, loving people like any other parent. So what are some ways you can make sure you never leave your kid in the car?

The practice of leaving kids unattended in cars is so dangerous many states have laws against it. Parents can be punished for leaving kids alone in a car for more than five minutes in Hawaii, Texas, and Utah, and Florida, the law is 15 minutes. But the worst consequence is the death of a child: more children have died from heatstroke after being left in a car this year so far than all of last year.

Know the risks of leaving kids in a hot car

"It is never OK to leave kids in a car - even with the windows down,” said Christopher McStay, MD, an emergency room doctor and assistant professor of emergency medicine at New York University Langone Medical Center, according to WebMD. “Your car is a greenhouse and temperatures can get exceedingly hot in an exceedingly short period of time." When it’s 90 degrees outside, it takes just 10 minutes for the temperature inside a parked car to rise to 109 degrees, which is life-threatening, especially to kids. Even on a 70 degree day, the temperature inside a parked car can reach 99 degrees after 20 minutes; 113 degrees after an hour.

Make A Habit Of Looking In The Car Before Leaving

"The biggest mistake people make is thinking that it can't happen to them," said Janette Fennell, founder of KidsAndCars, in an interview with CNN. Her organization gives safety tips for parents to avoid leaving their children behind in cars. "Everyone should practice safety measures and do whatever they have to do to remind themselves to check the back seat." She also recommends always opening the back doors before leaving the car.

Much like the incident this past weekend, earlier this year, a Mississippi mom forgot to drop her 2-year-old daughter at daycare and went straight to work. The little girl died, and her mom didn't realize her tragic mistake until she went to pick her up from daycare and realized she'd never dropped her off in the first place. These cases demonstrate how having your kid's daycare contact you when your child doesn't show up could potentially save their life.

Aaron Guevia wrote about his experience leaving his child behind in the car for TIME. Normally on his day off, a relative would watch his 10-month-old son while he ran errands. But one day his relative couldn't make it, and he had to bring his son along.

"The memory is faced with a challenge when it needs to remember something that you don’t do every day, such as take your child to school,” said Mark McDaniel, a psychology professor at the university of Washington at St. Louis.

“If the child has fallen asleep in their car seat, which is usually behind the driver’s seat, there is no visual information to remind you that there is a kid to drop off, and if you have not done it day in and day out, you need a cue,” McDaniel said. “But these are not bad parents."

Guevia wrote that he realized his mistake because he was fortunate enough to have forgotten his grocery list in the car. Leaving something necessary like a purse or note will ensure you check the backseat and see your child, reminding you to take them out of the car.

Teach Children A Vehicle Is Not A Play Area

This past weekend, two toddlers died playing in a car in Missouri. According to a fact sheet on heat stroke deaths of kids in cars, 29 percent of kids who died in a hot car were playing in an unattended vehicle. In many cases, parents aren't aware kids are in the car, and they lock themselves in while playing. Make sure your car is locked at all times so kids can't wander into the car and hurt themselves.