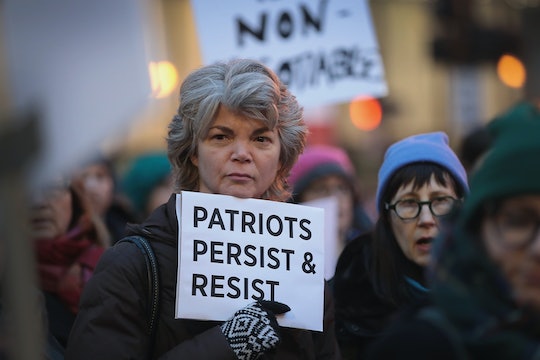 Holy moly, is it March already? Time flies, whether you’re actually having fun or not. But that’s the thing about March — there’s not much to it except a hard reminder that you haven’t followed through on a slew of New Year’s resolutions or that summer is (we swear) just around the corner. But March is also Women’s History Month, which is a solid follow up to February’s Black History Month. And if you need something to get you through the dull tail-end of the winter months, there are lots of ways to protest during Women’s History Month and make it worthwhile.

This year, the designated “history” months have taken on a whole new meaning as it seems like everyone is just a little more ready to fight the power than they were in recent years. The new administration entered office with policies that might run afoul of all the hard-earned rights certain minority groups have fought for over the years, and many Americans are recognizing that those rights — whether they center around race, gender, or sexual identity — might be in danger. Protesting in any way is the only course of action to ensure that those rights are protected.

The day after the inauguration this year, millions of women worldwide marched (ideally) in the name of intersectional feminism, making waves across a number of countries and catching the attention of both President Donald Trump and other world leaders. Here’s how to keep that momentum going.

The organizers of the Women’s March are putting together a nationwide strike for women on International Women’s Day, March 8. This might not be the best way to protest for all women: Women striking has worked in many other countries to draw attention to issues that affect them, and last year, women in Poland walked out of work to protest a strict abortion law. But in the United States, it might be more difficult for some women to carry out that kind of nationwide strike. Many women are the sole earners in their household and striking just isn’t in the budget. And how exactly does a stay-at-home mother strike? Joining the national strike is worthwhile, for sure, if you want to take part. But remembering that there are women who would strike for the cause if they could, but are unable to because they work on hourly wages or in low-income jobs that don’t allow it, is part of the fight. If you’re a business owner, allow women to take off for the day and pay them, like many businesses did for the immigrant workers strike earlier this month. If you’re not a business owner, you can strike in someone else’s name, as well as your own.

This is a hard one, but that’s a good thing. Most cities have tons of businesses run by women. If you are financially able, the next time you want to buy a book, pet supplies, or a new onesie, do a little internet search beforehand, opt out of big box retailers, and find a female-owned business in your community to order from instead. Challenge yourself for a month and try to leave non-essentials to only female-owned businesses. You’ll help the economy and maybe even make a new friend in the process.

Striking on International Women’s Day just isn’t possible for many women, as previously mentioned. But if you want to protest and stand up for gender equality, you can donate to organizations that support women. The Planned Parenthood Action Fund, NARAL Pro-Choice America, or Abortion Funds are places to start, but women’s reproductive rights aren’t the only things at play. The American Civil Liberties Union, the National Coalition Against Domestic Violence (NCADV), or the National Organization for Women (NOW) are all organizations that support women when they need it most.

Think Outside Your Box

In the wake of the 2016 election, many donated to some of the more mainstream organizations that support women and equality. If the Women’s March in January taught any of us anything, though, it was the power and necessity of intersectional feminism. Standing up for women means standing up for all identifying women. Donating to the NAACP Legal Defense Fund, the Council on American-Islamic Relations (CAIR), the Native American Rights Fund, Southern Poverty Law Center, or The Trevor Project is a good place to branch out with your activism and help marginalized populations.

We can’t all take off of work to strike or spend money we don’t really have to support women’s rights. But we can educate ourselves and others. Read a book by someone who doesn’t look like you. Make sure it’s someone who identifies as a feminist. Read feminist books to your kids. Talk about intersectional feminism at the dinner table any way you can and make an effort to speak up when someone says or does something that doesn’t sit right with you as a feminist. Heck, as a woman, make this month the month you ask for a raise.

Standing up for women’s rights means standing up for everyone’s rights. There are lots of ways to be a feminist. But this month, make it a mission and be deliberate about it.