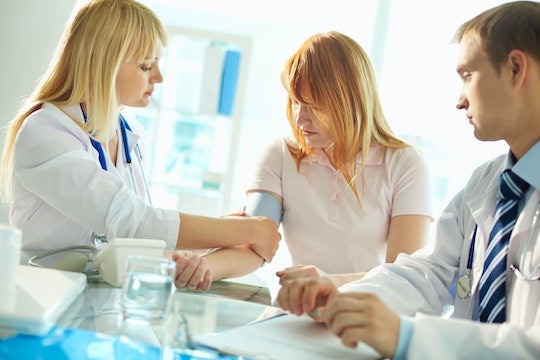 On Monday, the House GOP shared a draft of President Trump's healthcare bill that's intended to replace the Affordable Care Act. The American Health Care Act maintains a few provisions of the ACA that many people have relied upon to have access to health insurance, but there are also some major changes — and many of them will have major implications for women's health. Here are the women's health procedures Obamacare covered that "Trumpcare" won't — and not all of them are reproductive-health related.

Political attacks on women's health are hardly new. Since Trump took office, the number of bills specifically aimed at reducing access to reproductive health services have been cropping up consistently in states across the U.S. Since the early days of his campaign, Trump has talked about defunding Planned Parenthood and sending Roe v. Wade "back to the states," in an attempt to suppress the federal legality of abortions. In the American Health Care Act, one of the first major changes the GOP has laid out is the withholding of funds from clinics that provide abortion services — even if that's not exclusively what they offer for services, and even if they haven't been using government money to fund them.

The "prohibited entity" spelled out in the bill is really a euphemism for Planned Parenthood, which the GOP has wanted to defund for decades. No one is trying to hide the fact that the clinics are exactly who is being targeted in the bill: Trump confirmed that he had given Planned Parenthood the opportunity to stop providing abortion services so that they could keep their funding, but they refused, according to CBS News.

While the language of the bill seems to perseverate on abortion services, that's a small percentage of the work that Planned Parenthood does. Beyond that, there are other provisions that aren't explicitly to do with reproductive health services that could make it even more difficult for people to seek out crucial healthcare services.

Sub-section 1302 of Trump's plan lays out what Obamacare referred to as "essential benefits," which insurers had to cover at least at some level, and which will not be required coverage under Trump's plan. Among those essential benefits are things like emergency room visits, hospitalizations, and preventative care. Essentially, what that means is that insurers won't be required to provide a certain level of coverage. As it stands at the moment, it's impossible to say which insurers will make changes, and how much they'll change their coverage by. That being said, it's unlikely that these services won't be covered at all — they just more than likely won't be covered in cheaper plans or plans that are more subsidized.

Coverage will further vary because people who can afford to pay more for more comprehensive insurance plans will, therefore, get more coverage. Therefore, the removal of that provision, combined with "defunding" Planned Parenthood, means there are several areas of healthcare access under threat for everyone — even if they currently have insurance.

Since the Hyde Amendment in 1976, Planned Parenthood has not used federal funds for abortion services. What they do use federal funding for are things like contraception, annual exams, education, mammograms, and cancer screenings. Per Medicaid, the only exception has been for abortions that are the result of rape or incest, or if the pregnant woman's life is in danger, according to the ACLU. The American Healthcare Act retains these exceptions for now, and point out that people can purchase separate healthcare plans to cover abortion services if needed.

One of the services that Planned Parenthood offers is educating people about their birth control options. Today, there are a wide variety of choices if your intent is to prevent pregnancy, but the hormonal birth control options can also be used by individuals to treat a number of health conditions. This is one of the areas where government funding is put to use.

Obamacare had a mandate that meant many people got their birth control prescriptions for free. While the words "birth control," "contraception", and "contraceptive" are all missing from the draft of the American Health Care Act, Trump has made it clear that he intended to rollback any mandates that would require employers to cover contraception in their insurance plans. While Obama intended for birth control to fall under the category of preventative care services, it's unlikely that Trump's plan would agree to that.

97 percent of the work Planned Parenthood undertakes is related to offering preventative services, according to Politifact. These screenings, such as mammograms for breast cancer and pap smears for cervical cancer, can and do save lives. Many cancers, like ovarian cancer, may not show symptoms until they are in advanced stages. They can, however, often be detected by ultrasound and pelvic exams. Screenings like these make it more likely they'll be caught — and early enough to be treated, according to the American Cancer Society.

One of Obamacare's essential benefits was emergency room services. While it's unlikely that insurers would be able to get away with not covering ER trips at all, they are costly for everyone involved. If the American Healthcare Act no longer mandates that insurers have to cover emergency room visits at a certain level of coverage, people could definitely find themselves responsible for footing a lot more of the cost. Going to the emergency room for a urinary tract infection, for example, can cost around $2,000-$2,500 in many parts of the U.S., according to research from PLOS.

With insurance, you wouldn't have to pay all of that by yourself — usually you're just responsible for a co-pay or co-insurance. Many insurance plans have a set amount for ER visits, which is laid out in your benefits package. But, if the American Health Care Act doesn't require insurers to cover a certain level, the amount you have to pay even if you are insured could increase.

Many people rely on the fact that their insurance covers things like outpatient therapy, inpatient stays at mental health facilities, addiction treatment, or medications that help treat depression and anxiety. Under Obamacare, mental health services were considered an essential benefit.

The American Healthcare Act also plans to rollback the Medicaid expansion starting in 2020. Many people are only able to access mental health services because they have Medicaid. When the expansion stops it will limit the ability of individuals who qualify for Medicaid to access it, and the services that it covers.

Prenatal care is essential when you're pregnant, not just for your health, but the health of your fetus. While these services were considered essential benefits under Obamacare, they are included in the provision scrapped by the American Healthcare Act.

Considering how much the GOP seems to prioritize the health of fetuses over the health of the just about anyone else, it's sort of ironic that they don't consider these types of services as essential. Prenatal care is essential in detecting possible labor and delivery complications and screening for conditions that could prove fatal for the fetus and the person carrying it.

This certainly isn't the time to be dialing back insurance requirements to make sure these services are covered, either: the rate of maternal deaths in the United States has been trending upward for the last few decades, according to the CDC. In the state of Texas, the maternal death rate is currently higher than anywhere else in the developed world, jumping up by 27 percent in just two years, according to research from the journal Obstetrics and Gynecology.

The researchers said that such a jump was hard to explain “in the absence of war, natural disaster, or severe economic upheaval," — which many feel could certainly be on the horizon now.