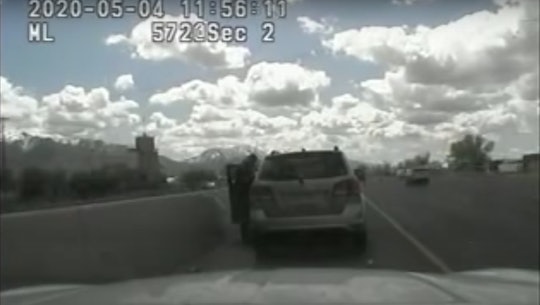 After a young boy's mother refused to buy him an expensive sports car — gasp! — the 5-year-old went on a mission to buy a Lamborghini himself and was pulled over by police in the process. But with just $3 in his pocket and no driver's license to his name, the boy walked away with one wild story, some media attention, and probably one furious and terrified mother at home.

However, after turning his lights and sirens on, what the trooper discovered was a young 5-year-old boy from Ogden, Utah, a city north of Salt Lake City, driving his parents' SUV on his way to California. "I was not expecting to find what I found," he said. "He was sitting on the front edge of the seat so he could reach the brake pedal to keep the car stopped."

The Utah Highway Patrol wrote on Twitter that the boy told officers he "left home after an argument with Mom, in which she told him she would not buy him a Lamborghini." So the boy "decided he'd take the car and go to California to buy one himself."

"He might have been short on the purchase amount, as he only had $3 dollars in his wallet," the Utah Highway Patrol tweeted. A new Lambo comes with a pretty high price tag; for reference, a Lamborghini can cost anywhere between $200,000 to $500,000, according to a dealership in New Jersey.

Morgan told reporters that he called the boy's parents after pulling him over and helping him stop and turn off the car. "Then we started looking for means to call his parents and we had them come out to the scene where they took custody of the boy and the car," Morgan said, adding the boy was "upset" and "on the verge of tears" while talking to him.

While nobody was injured and no property was damaged as a result of the boy's escapade, local NBC News affiliate KSL reported that charges could be filed against his parents. "We're counting our blessings (nobody was hurt) but that doesn't mean a high-risk situation that put a lot of people's lives in jeopardy (didn't occur)," Lt. Nick Street from the Utah Highway Patrol told the news outlet. "Based on that, we'll talk with the county attorney and see what charges they would like filed or screened with them and we'll do that."

As for whether this is an isolated incident, according to Morgan, his parents said that the boy "had not driven before" and "this was the first time he'd done anything like this."