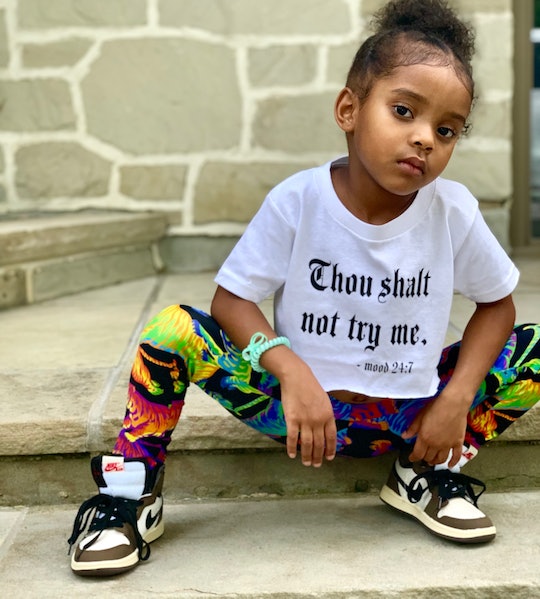 Maintaining a social media feed can be a full-time job for influencers, according to a recent Forbes article. Between determining content, scouting a location, filming, editing, partnering with brands and creating captions, some influencers are at work from the time they wake up to the time they go to sleep.

But 5-year-old Grey Skye Evans simply can’t spare that much time. Between kindergarten, dance classes, bath time and her precious screen time (she — like just about every other 5-year-old we know — obvi needs to watch some YouTube challenges daily), Evans has just enough time to squeeze out a quick shoot each day with her mom.

Still, Grey, AKA @thisisgreysworld, manages to snag more than 400,000 Instagram followers and nearly 40,000 YouTube subscribers who watch her tiny hip hop videos and enjoy her sassy expressions, which seem more teen-like than kindergartener.

“I like doing the Instagram part and I like making money,” Grey tells Romper. “I save it in my piggy bank or in the big bank — I’m not allowed to spend it.”

How does she do it? Here’s a typical day in Grey’s world.

7:40 a.m. Grey’s mother drags Grey out of the bedroom the little siblings share. There are three little siblings including Grey, and three older siblings (one is in college). Grey is not a morning person, so her mother wakes her up at the last possible moment to get to school on time.

8:30 a.m. The first bell at kindergarten rings, and Grey dashes through the doors just in time. While there, Grey dusts the shelves, she bakes and she cleans. Grey attends a local Montessori school, and she learns how to take care of herself. “I don’t dance there,” she says. “That’s not a part of school.”

3 p.m. It’s pick-up time. Grey’s mother, children’s book author Ylleya Fields, drives through the carpool line to grab Grey before swinging by Starbucks for a cake pop for the 5-year-old. This is a special treat. Most days, Grey gets a post-school hamburger or chicken nuggets and fries as they race to dance class, which Grey takes twice a week.

4 p.m. Grey learns a combo of ballet, tap and jazz in her competitive dance team. While she’s known for her hip hop, she doesn’t take formal classes. “God taught me,” Grey says.

5:30 p.m. Fields picks Grey up from dance and takes her home for a dinner of homemade chicken and rice, which Fields cooked while all the kids were at school.

7 p.m. It’s time to practice for whatever shoot Fields planned for Grey. “I’m like that scary mom-manager person,” Fields says. Fields teaches her a quick 20-second clip, which Grey picks up instantly. Usually, she aces it after trying it four or five times.

“Not only can she dance, but she can imitate anything she sees,” Grey’s mother says.

The posts, which pop up two or three times a week, usually go up more frequently on weekends because most of Grey’s followers are kids.

Sometimes, though, when Grey is working on a paid campaign, she needs to practice what that campaign is requesting, and that can take a few hours out of her day. “When you start getting campaigns, that’s what’s making all the practices worth it,” Fields says. “When Grey says she likes making money, she knows that these things will pay off in the future: they will allow her financial freedom, and that’s important.”

8:30 p.m. Grey is allowed electronics time for an hour. She loves watching “Gummy versus Real Food” challenges, or the “How much can you hold challenges” (kids head to Target and literally hold as many toys as they can in their hands for a specific amount of time; if they can do it, they can keep the toys).