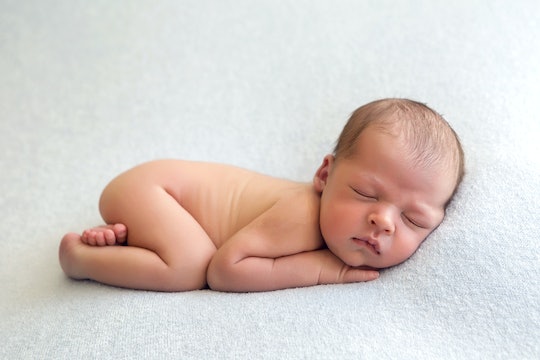 My sister was born the day after Christmas, and my father often jokes that they should have named her "Noel." But my mom put the kibosh on that and named her when he went out to have a cigarette. (Also, it might have been retribution because my mother also smoked and could not leave the maternity floor. It was 1980, after all.) I actually think it was a cute idea, if not a bit corny. However, New Year's Eve is easier for themes. If you're soon expecting a little one, here are 50 names for New Year's Eve babies that are meaningful but not cliché.

Holiday themed names can quickly veer into the absurd. Embarrassingly enough, "Noel" would not have been my family's only child named for the holiday. My great aunt was named Eileen, but born on Easter as she was, she gained the nickname "Bunny." And my Christmas puppy was named "Nikki" after St. Nicholas. We have a problem and we cannot be stopped. If I ever had a child born on St. Bernadette's Day, I'd have an "Etty" quicker than you can say "lapsed Catholic." In reality, it is a pretty great tradition that holds significant meaning for families. What you name your child stays with them their whole lives, and there's something lovely about remembering how and when they came into this world in their name.