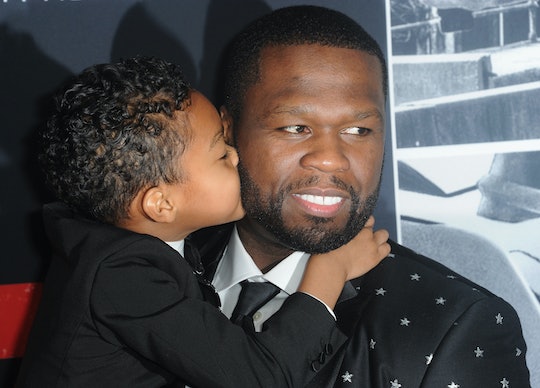 With Christmas just around the corner, one celebrity dad has gone all out to give his 7-year-old the ultimate present: free reign in their own toy store. Rapper 50 Cent gifted his son a private shopping spree at his very own Toys "R" Us store, according to video footage shared on Twitter. But while the memory of having your own toy store is undoubtedly priceless for a child, this gift definitely came with a serious price tag for dad.

50 Cent, whose real name is Curtis James Jackson III, revealed Saturday on Twitter that he'd surprised his 7-year-old son Sire with a shopping spree at his very own Toys "R" Us. As USA Today reported, the rapper rented out one of the only two physical Toys "R" Us stores in the entire country. As a result, the Toys "R" Us store at Westfield Garden State Plaza mall in Paramus, New Jersey, was temporarily re-branded as "Sire's Toys 'R' Us" for his son's visit.

In video shared on social media, Sire appears to have been left speechless by his dad's elaborate gift. "You can have whatever you see," 50 Cent can be heard telling his visibly shocked son after they walk into the store. "All of it's yours, really, so you might as well pick out whatever you want, right?"

The duo then make their way around the store, playing with what appear to be lightsabers and Nerf guns while Sire picks out some toys to take home. Toys "R" Us mascot Geoffrey the Giraffe even stopped by to play with Sire and pose for pictures.

Of course, the act of temporarily turning one of the last Toys "R" Us stores into Sire's Toys "R" Us didn't come cheap. The rapper reportedly spent approximately $100,000 on his son's personal and private shopping spree, reported TMZ.

While costly, 50 Cent's extravagant gift seems to have gone down well with his son. "When I asked my Dad for the 'WHOLE Toys R Us Store' for Christmas I didn't think he would actually do it, but he did," a caption recently posted to an Instagram account Sire's mother, model Daphne Joy, runs for the 7-year-old read. "Thank you Daddy! Best Christmas Ever!"

The issue with giving your children their greatest wish, however, is figuring out how you'll top that gift the following year, meaning 50 Cent should likely start brainstorming now for Christmas 2020.