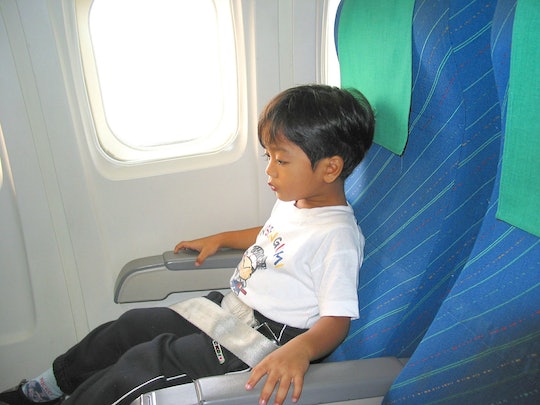 Your Seat Mate Wants Your Kids To Go Away

Flying is brutal for pretty much everyone, and there's a special type of pain for parents and guardians doing so with young kids. Not only do they have to worry about keeping the little ones comfortable and entertained while they're smushed into a tiny enclosure 40,000 feet off the ground, but they have to do it all while getting the stink eye from fellow passengers trying to snooze or watch the latest season of Orange Is the New Black on their iPads. That's because we humans are awful at tolerating inconveniences like hearing a baby wail or a child yell "All aboard!" over and over at the top of her voice. So, these harried moms, dads, and other child-minders probably won't be surprised to know that 52 percent of air travelers think families with kids should sit separately on flights.

But the fact that this stat, one of many interesting tidbits from Airfare Watch Dog's Annual State of Travel Survey, isn't exactly a revelation doesn't make it any less rude. Because there's really no reason that families with kids should be sequestered just because other passengers would prefer to recline their seats all the way back like jerks and pretend they don't exist.

There are others that people would rather not embrace as seat mates, either, according to the survey: someone who's sick or coughing (39.3 percent), someone who has an unpleasant body odor (28 percent), or someone who is overweight (13.6 percent). In this case, the survey respondents who weren't so thrilled about kids on planes took issue with those ages 10 and under. And Scary Mommy's Valerie Williams can actually get on board with the idea of putting these families together away from the other passengers — as long as it's in first class, as she wrote in a post on the subject:

We’d be hard-pressed to think of a group of people more deserving of extra leg room (have you seen a 3-year-old try to stay in one of those tiny seats with no spare space for the entirety of a cross-country flight?), warm cookies, nicer TVs and top-shelf alcohol.

But maybe this new statistic that more than half of flyers want kids out of sight and out of mind (but mostly out of earshot, probably) is simply emblematic of society's aversion to sharing space with anyone, if we can help it. After all, the Airfare Watch Dog survey also found that a full 40 percent of people would shell out extra to buy a whole row of seats for themselves. Now that I can get behind.