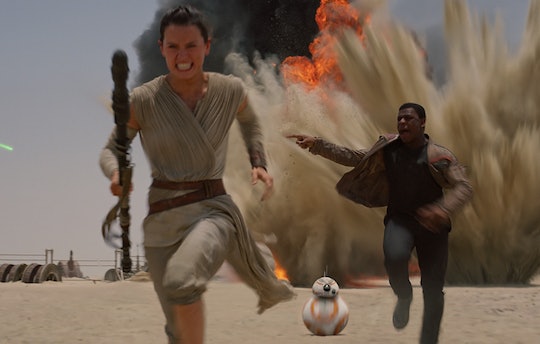 56 Questions I Had Watching 'Star Wars' As A Mom

You’ve seen the Star Wars movies more times than you care to count. Or you’ve seen them a few times, enough to quote, “Luke, I am your father!” Or maybe you’ve seen them once or twice, at the behest of a partner, and now you face total saturation with your Wookie-loving spawn. You’ll be dragged — confused — to the next movie, where you’ll ask inappropriate questions and get shushed. But I haven't re-watched the movies lately, so it seemed like primetime to dive into the franchise all over again, since there's some big movie release happening soon, or whatever. (JK. I know that The Force Awakens releases Friday at 12 a.m. I would not forget such a national holiday.) The new movie will likely draw on moments from the past, though, and it was enough to convince me that I needed to watch Star Wars again, but this time, as a mom — and man, did I have a lot of questions.

Whatever your familiarity level, Star Wars is a cultural force you can’t escape. But like any epic, especially any sci-fi universe created whole-cloth from someone’s imagination, it’s got some plot holes. My status as a mom doesn't make me inept, but there are some holes in the franchise that've left me more than confused once the closing credits begin to roll. Some gaping plot holes, in fact, which members of the Star Wars fandom could probably explain to me, but I’m too lazy to look them up on Wookieepedia. (Yes, is a real site.)

Like I said, I haven't watched the movies in some time. My partner is a Jedi junkie, so I already had one count against me, but I decided to go public with my confession: We are days away from the release, and I can't totally remember everything that's happened, and the stuff I do remember is even a little fuzzy.

Once I'd come clean, I vowed to watch the movies, start to finish, making a note of the things that stood out to me as a mom of three. Granted, there were a lot of questions, so I crunched them down. My mom street cred doesn't mean that my questions would be much different than, say, anyone else's, but I did have some personal ~feelings~ about the films now that I've got three little Jedis in tow.

Here's what watching Star Wars as a mom was like.

When I pressed play for the first time, one of the things that stood out to me most was the lack of communication between the characters. Clearly Chewbacca and Han Solo understand each other, but they still choose to speak to each other in their own languages. The same goes for Han Solo and Jabba the Hutt; Han speaks English while Jabba speaks Huttese, but both seem to know what the other is saying. It also happens with R2-D2 throughout the movies — he speaks some form of droid language involving only whistles and beeps that no one ever fails to understand. There’s plenty of cross-language communication. But no one speaks another person’s language.

Um, what? Who is the adult here? Why is no one talking to each other in a way we can all understand?

Is this not exactly the situation with my toddler?

Can I pretend I don't understand my toddler?

What about my husband?

Somehow all understand each other perfectly. But they don’t dare speak a language other than their own. It’s like when my 2 year old says, "ABACKA!" and I answer, "Yes, honey, you can have a cracker after dinner."

Is this an obscure rule of etiquette? A convenience? WHAT IS THE SECRET?

Would it clean my home?

I would like it to clean my home, and replace my Shark, so where can I buy it?

Will it care for my children, like the robot that Paulie owns in the fourth Rocky movie?

Lest my husband let me suffer, I now know that C-3PO is supposed to be a protocol droid with the ability to speak several million languages. But at no time does anyone ask him to translate.

If we bought said C-3PO to clean, would it speak a language my children understand?

Does a C-3PO understand toddler speak?

The beep-boop-bop noises are cute, but where is the mute button?

Does said C-3PO make coffee? Like, fancy coffee that I always want to buy but feel guilty spending $5.60 on? Can C-3PO make me fancy coffee, damn it?

The one instance of translation comes in the Mos Eisley cantina, when an alien says another is telling Luke that “He doesn’t like you.” C-3PO is therefore totally useless.

So, uh, is that a no on the fancy coffee?

The movies paint C-3PO and R2-D2 as the biggest jerks in the universe. C-3PO was built by Anakin Skywalker. The robot and his beeping compatriot were there for all of the prequels. They know Anakin grew up, knocked up Padme, turned evil, and got owned by Obi-Wan in the volcano-place. They probably know, since Obi-Wan does, that Anakin is Darth Vader. In fact, they know everything, from the real identity of Ben Kenobi to the abilities of Yoda.

That said, why are C-3PO and R2-D2 keeping secrets?

Where are their parents?

Why did their parents not teach them that secrets are bad, especially when they could hurt someone?

Why do they want to hurt Luke? Leia?

They certainly know Padme Amidala popped out twins named Luke and Leia. The duo could spill the beans and save everyone a hell of a lot of trouble. They’d also stop Luke from making out with his sister that one time. The only conclusion is that C-3PO and R2-D2 are either monumental a-holes or secretly working for the Dark Side.

Because Princess Leia won’t talk, Vader decides to try out his new planetary destroyer — aka the original Death Star — on her home planet of Alderaan (wouldn’t her home planet be Tatooine or Naboo? And why’s she a princess anyway — did she get adopted by the King of Alderaan?).

Did Leia marry into the family, like Duchess Kate?

Speaking of which, do you think Duchess Kate has a C-3PO?

Do you think it makes her fancy coffee?

An entire federation planet gets nuked into nothingness. Wouldn’t someone notice? Like, hey, haven’t heard from cousin Steve on Alderaan for a few weeks. Think he’s okay? And if they did notice, wouldn’t everyone in the galaxy immediately sign up to help the rebels, because Darth Vader is blowing up planets. Think the anti-nukes movement times one billion.

Why isn’t Leia a Jedi?

They never hand Princess Leia a light saber and start her on the path to the Force. Yet when ghost Obi-Wan worries that Luke is their only hope, Yoda closes his eyes and says, “There is another.” Presumably he’s talking about Vader’s other kid.

What's wrong with Leia being a Jedi?

Make Leia a Jedi, damn it!

Wouldn’t it make sense to train her as a Jedi, you know, just in case?

Is this a monumental case of galactic sexism?

Or is it punishment for hooking up with Han Solo?

Or is it somehow C-3PO's fault?

How come Darth Vader and Obi-Wan can’t shoot lightning from their hands?

The Emperor electrocutes Luke over and over, which is one reason Darth Vader has to save him. But no other Jedi in the series, including Yoda, can manage the hand-lightning.

Is Obi-Wan not good enough?

Or is the Emperor just that much of a better Jedi than them?

If that’s the case, where does Master Yoda fit into the grand scheme of the Force?

Why do only Jedi have lightsabers?

The only people in the galaxy to have lightsabers are Jedi/mean former Jedi.

Why doesn’t Han get one?

Jabba the Hutt is certainly rich enough to buy one.

Ugh, are my kids going to want lightsabers now?

Are lightsabers strictly regulated by galactic law, like machine guns, because an ordinary person would chop their ankles off if handed one?

Are lightsabers so few and far between because extensive lightsaber background checks prevent just anyone from going and buying one?

Do lightsabers ever go on sale at the galactic grocery stores?

If they do, why don't more people buy them?

Do they need the Force to turn on? It just seems that the Rebel Alliance would be vastly more effective if all the troops were armed with lightsabers.

Or do they need batteries?

Can we get the Rebel Alliance some batteries, you guys?

Ugh, I am going to regret saying that, aren't I?

You can’t escape Star Wars. You also can’t escape its plot holes and missteps. Hopefully J.J. Abrams will answer some of these questions in The Force Awakens. Maybe then we’ll find out if C-3PO and R2-D2 are total jerks. Luckily for us, we’ll only have to wait until December 19 to find out.