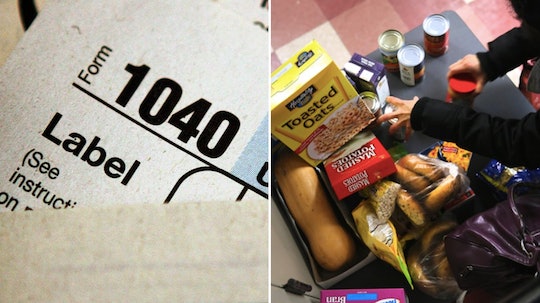 6 Agencies Struggling To Perform Essential Duties During The Government Shutdown

If you aren't a federal worker or know someone who is, you might not be aware of all of the agencies affected by the government shutdown in 2019. From the Food and Drug Administration (FDA) to the The Internal Revenue Service (IRS), the ongoing government shutdown has far-reaching consequences for countless agencies in the United States.

As of Thursday, Jan. 24, the government shutdown entered its 33rd day with no foreseeable end in sight. President Donald Trump — who is arguably to blame for this situation given his unrelenting desire to fund a border wall at the U.S.-Mexico border — seems content to keep the shutdown going despite the toll its taking on citizens and federal agencies.

People who take part in the Supplemental Nutrition Assistance Program (SNAP), for instance, recently received their February funds ahead of schedule, according to Business Insider. Although this might seem like a bonus, it's potentially problematic. That's because the U.S. Department of Agriculture — which funds SNAP — doesn't have any funding for March, according to HuffPost. If the government shutdown continues into March or April (what a terrifying prospect), there's a possibility countless families won't receive assistance for their basic food needs.

But the U.S. Department of Agriculture isn't the only agency affected by the government shutdown. In fact, there are at least six agencies that you might not have considered during these past 33 days.

Following a year of numerous food recalls, you're probably not thrilled to see the FDA on this list. Unfortunately, the FDA announced on Wednesday, Jan. 9 that it had "stopped routine food safety inspections of seafood, fruits, vegetables and many other foods at high risk of contamination," according to The New York Times.

Dr. Scott Gottlieb, the agency’s commissioner, noted in a series of tweets on Jan. 22 that workers are doing their best given the circumstances. He wrote:

Many people look forward to their yearly tax refund, an event that could face setbacks due to the shutdown. Why? It has to do with the fact that many IRS employees are threatening to ignore the Trump administration's order to return to work without pay, according to CBS News, meaning the administration might be short-staffed. If the administration is short-staffed, then it's possible taxpayers will have to wait longer for their refund checks.

“The politicians are playing with dynamite if something goes wrong during filing season,” former IRS Commissioner Larry Gibbs explained to Politico. “If you don’t pay refunds to people who are expecting them on a timely basis, all hell breaks loose.”

The Environmental Protection Agency — whose mission is to protect human and environmental health — had to furlough many of its employees during the shutdown.

Suspended tasks include, according to The Hill: "hazardous waste cleanup efforts at Superfund sites, on-site inspections at power plants, reviews of toxic substances and pesticides, and responses to Freedom of Information Act requests."

Whale rescue groups are struggling during this time, as the NOAA provides essential operations "like tracking the animals, operating a hotline for mariners who find distressed whales and providing permits that allow the rescue groups to respond to emergencies," according to the Associated Press.

Considering many whales are endangered, it's essential these functions resume ASAP.

It's also important to consider that the National Weather Service falls under the umbrella of the NOAA.

“The primary effect is on the research and development side,” Deputy Administrator for NOAA, Dr. Neil Jacobs, told Memphis, Tennessee television station WATN.

Biologists regularly conduct studies to best accommodate certain engendered or threatened species. Due to the shutdown, scientists efforts in this area have been immobilized. Scientist Harvey Bootsma, for example, told NBC New York that he can't book a boat for "summer experiments involving quagga mussels in Lake Michigan, where the invasive pests are suspected of causing a decline in perch, whitefish and other prized species."

Countless parents depend on WIC, a program that provides "federal grants to States for supplemental foods, health care referrals, and nutrition education for low-income pregnant, breastfeeding, and non-breastfeeding postpartum women, and to infants and children up to age five who are found to be at nutritional risk," according to the USDA's website.

Unfortunately, the fund for WIC is expected to run out by mid-February, according to CBS News. If this happens, millions of parents (7 million people participated in the program each month during the first half of 2018, according to the USDA) won't be able to purchase basic necessities for their children.

Of course, there are many other agencies to name here. But these six aforementioned agencies act as an important reminder of what's at stake if the government isn't reopened soon.