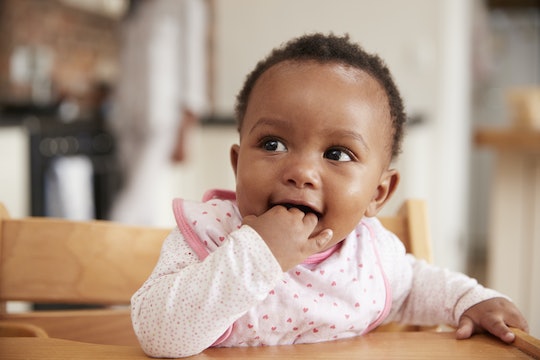 6 Baby Sign Language Videos To Watch, To Teach Your Little One All The Basics

The phase during which my daughter would sign "all done" when she was finished eating ranks up there as one of my all-time favorites. There's nothing cuter than watching your child learn to communicate for the first time. I remember, though, that it was daunting figuring out how to start teaching her to sign, and I wish I had found these baby sign language videos back then, because they probably would've made the process so much easier.

Baby sign language videos are a great tool to have when you're teaching your little one to sign, and sign language is an amazing way babies can actually communicate early on. "Children are able to communicate through sign language earlier than they are able to use spoken language. As a result, parents and children are able to bond using this shared system of communication," says Shelby Rideout, founder of Bright Signs Learning, in an interview with Romper. Rideout suggests starting to sign with your baby as early as 6 months, with any time in the first year being the optimal time for babies to pick up signs quickly.

One of the reasons that most parents consider using sign language is to help their soon-to-be-toddlers start to communicate and mitigate frustration that might arise because they can't express themselves. Rideout explains, "One of the benefits that parents appreciate the most is decreased frustration and tantrums. Babies reach a critical phase where they know what they want but may be unable to communicate it to their caregivers. Sign language gives them a way to communicate their needs." This is why Rideout suggests starting with signs that your baby will likely use most frequently, like more, no, yes, mommy, and daddy.

If your baby is older than a year and you're just getting on the sign language train, there are still ways it can benefit your child, according to Rideout, like increased IQ and vocabulary and boosted early reading acquisition.

Here are a bunch of simple videos to get you started if you're interested in teaching your baby to sign.

More Like This
The Best Toys For 3-Month-Olds
How To Breastfeed A Baby With A Cleft Lip Or Cleft Palate
Can You Get The Covid Vaccine For Kids Under 5 At CVS?
6 Ways To Fix A Shallow Latch So Your Baby Can Nurse Properly