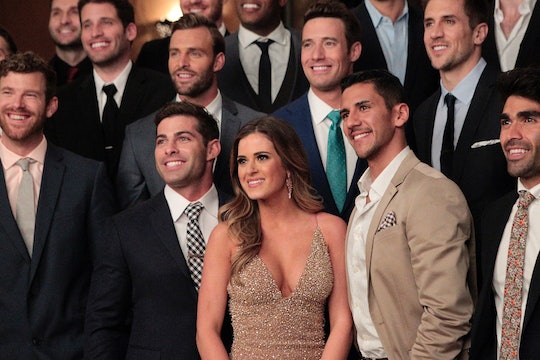 6 'Bachelor' Candidates Not From JoJo's Season, Because There Are Other Options

JoJo Fletcher's season of The Bachelorette hasn't even ended yet and speculation about the identity of the 2017 Bachelor is already at an all-time high. Most of the time, a new Bachelor is chosen from the pool of eliminated contestants from the Bachelorette season that aired immediately prior. That tradition started with fourth Bachelor star Bob Guiney and in fact, the last Bachelor who didn't fall into that category was Season 15's Brad Womack, back in 2011. It remains to be seen whether the show will continue the pattern it's stuck with for the last five Bachelors. In the event that the show decides to mix things up, here are several possible 2017 Bachelor candidates who aren't from JoJo's season.

While it would be veering away from the show that we know very well at this point, it might be nice for a change of pace. Imagine if the show picked a candidate from a completely different season — or better yet, from outside of Bachelor Nation. That would completely reset the table. We wouldn't know what to expect, and neither would the women coming on the show to find love. It might be interesting to see how some past Bachelorette contestants — cough, Nick Viall — would attack the lead role, or how people outside of the Bachelor world would handle it.

Nick, a two-time contestant, had the special distinction of making it to the final two twice, so he clearly knows what he's doing. He's a recent enough alum to draw in viewers who recognize and love and/or hate him. Plus, Nick was a rumored contender for the most recent The Bachelor Season 20 anyway, though that went to JoJo's ex Ben Higgins in the end. It's just a question of whether he makes a match that takes him out of the running while appearing on Bachelor in Paradise Season 3.

Nyle would be an amazing Bachelor star for so many reasons. The gorgeous model, actor, and deaf activist has already had more luck with reality TV than most people have in a lifetime, taking home the title of America's Next Top Model in Cycle 22 and winning Season 22 of Dancing With The Stars the next year. Nyle was the first deaf winner of ANTM, and he revealed via Twitter that he is sexually fluid. In an interview with Us post-disco ball win, he joked about being offered the Bachelor gig and definitely seemed open to it. Yes, please!

Bachelor producers have been after the famously virginal quarterback Tebow for years already. Allegedly, negotiations got pretty close to final back in 2012, but Tim backed out in the end, wanting to focus on his football career. In early June, Tebow spoke with Extra, where he confirmed that he is single but still iffy about participating in The Bachelor. On the bright side, he didn't flat out say no now, did he?

Lamar, a Portland-based sportscaster, campaigned for the Bachelorship ahead of Season 17. His campaign got some traction in the media because, well, just look at him.

The former college basketball player is incredibly good-lucking, articulate (duh, he's a sportscaster), and works with kids. He'd be a great pick for the Bachelor (assuming he's somehow still single), and it's about damn time we have a black Bachelor.

Jake, a former Bachelor, had a messy split with his lady of choice, Vienna Girardi. He dated Kristen Chenoweth for a bit after that, but currently appears to be single. Plus, his surprise appearance at the beginning of JoJo Fletcher's season was definitely suspicious. It wouldn't be the first time a former Bachelor gets a do-over.

The Bachelor king of do-overs himself, Brad Womack, could give it a third whirl, because why the heck not? Brad is presumably still single, though he maintains virtually no social media presence of his own. After making Bachelor history by choosing neither of his final two contestants in Season 11, he picked and broke up with future eighth Bachelorette Emily Maynard in short order. Maybe third time will be the charm for Brad.