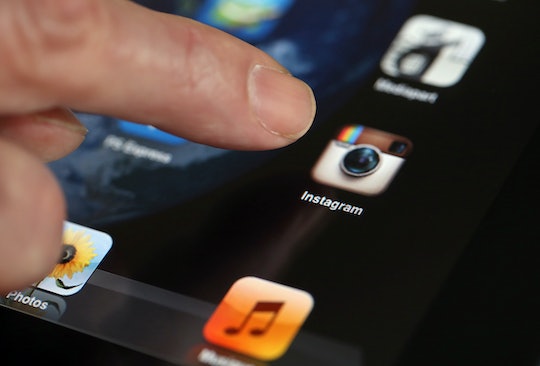 When Instagram first announced the release of its Instagram Stories feature, it was immediately pretty clear that there was an awfully close resemblance to the already-super-popular app, Snapchat. Some weren't too thrilled about that, but honestly? If you're anything like me (aka, older than 25 and not particularly tech-savvy), then chances are you weren't on Snapchat anyway, and have only just realized via Instagram Stories that there are a whole crop of celeb parents posting cool temporary videos and photos throughout the day. Even if you aren't really one for posting things yourself, you might be interested in following along with other people's updates, and these 6 celebrity parents using Instagram stories are a pretty good place to start.

The downside of course is that, as with Snapchat, Instagram Stories only actually stick around for 24 hours, so if you miss them, they're more or less gone (and won't show up in your regular Instagram feed the way most posts do), and some celebs are much more prolific with their updates than others. But if you want to follow any of these IG-loving parents, the process is the same as it always is: click "follow" on their regular Instagram feed, and then look for their updates in the Stories feed running horizontally at the top of your app.

Catherine Giudici and her former-Bachelor hubby Sean Lowe are new parents to an adorable baby boy named Samuel Thomas, and lucky for fans they are super happy to share photos and updates. Giudici's normal feed is pretty awesome and full of mom updates, but she also makes sure to post tidbits to Instagram Stories here and there as well, including this super sweet selfie snuggling her little boy.

Former Bachelorette Ali Fedotowsky is also a new mom — she and Giudici were due within a few weeks of each other — and she uses Instagram to share snaps of her beautiful daughter, Molly Sullivan, with her 546k followers. Most recently, she shared this photo of her daughter not looking particularly impressed during a snuggle with the family dog, which is a bit of a hilarious departure from her normal Insta-perfect, beautiful feed.

It's hard to believe that Jamie Lynn Spears' daughter Maddie could already be heading into the third grade, but that's just what this country singing mom shared with her followers — complete with a "first day of school" photo on Instagram Stories (complete with an adorable uniform and a monogrammed backpack).

Nick Cannon definitely seems like a proud papa to his twins Moroccan and Monroe, and one place that's pretty obvious is in his Instagram Stories uploads. Most recently, Cannon shared a video of his kids getting ice cream after karate class — and, in total "dad" style, he commented that his son's choice of chocolate ice cream and Sour Patch Kids candy looked "like a stomach ache." (No word on if there was any puking on the car ride home!)

Is there any better way to commemorate the kind-of-important-but-not-really milestone of the "month birthday" than with a temporary Instagram Stories update? Actress Soleil Moon Frye welcomed her fourth child — a son coincidentally named Story — three months ago, and used the app's new feature to celebrate his three-month birthday. Moon Frye's three other children (daughters Poet Sienna Rose and Jagger Joseph Blue, and son Lyric Sonny Roads) also make regular appearances on mom's feed, as do some of her celeb mom besties, like Rachel Zoe and Melissa Joan Hart.

Lauren Bush Lauren might be known for a lot of things — she is a former fashion model, the CEO and co-founder of FEED Projects, and also the niece of former President George W. Bush — but her latest role is that of new mom to her son, James, with husband David Lauren. Lauren's feed is full of sweet, swoon-worthy photos of what looks like a laid back, inspirational mom life in New York City, and her adorable son often takes front and center. But from the looks of it, Lauren and her son also do tons of "normal mom" stuff too: in her latest Instagram Stories post, Lauren uploaded a photo of James at an outdoor music class — complete with the requisite colorful parachute that every kiddie music class seems to include.

Of course, Instagram Stories is popular among lots of other celeb parents too — Chrissy Teigen, Reese Witherspoon, Carrie Underwood, Kate Hudson, Lily Aldridge, and Kourtney Kardashian have all used the app feature to share temporary tidbits with their followers — but if you aren't following along regularly, you might miss what they post. Nothing like yet another social media app to make it that much harder to peel yourself away from your phone, right?