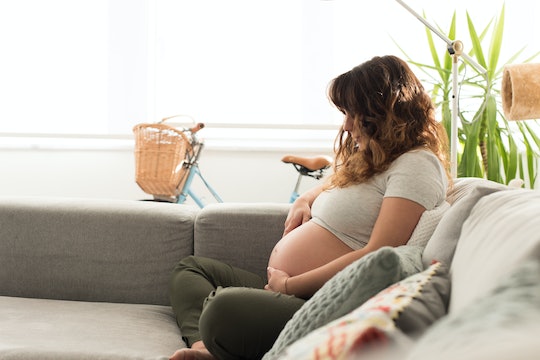 I was one of those unlucky moms who started getting Braxton Hicks contractions in the second trimester of my pregnancy that lasted for the duration. It was incredibly annoying. The tightening, firm mass my belly became was not only uncomfortable, it caused me significant anxiety. I was always worried that they'd become more before my baby had a chance to finish developing and growing. It wasn't until my OB-GYN literally held my hand and spoke to me about the differences as I trembled that I calmed down somewhat. It turns out the differences between Braxton Hicks and real contractions can be somewhat subtle and easy to miss.

I don't think I actually believed my obstetrician that I was experiencing false labor until I got to the real deal. There was no mistaking the industrial vice gripped pain that was tightening around my abdomen when I was in labor. According to the Cleveland Clinic, that's pretty standard. While Braxton Hicks can be very uncomfortable, and highly off-putting, they're usually not the fierce angry waves of pain that accompany the real deal. Braxton Hicks are not simply an annoyance, according to the Cleveland Clinic. They can be worrisome if they don't stop, or if they begin to progress into painful, more serious contractions. But if you're still on the fence, here are some other ways to tell if it's a real contraction or just your body practicing.