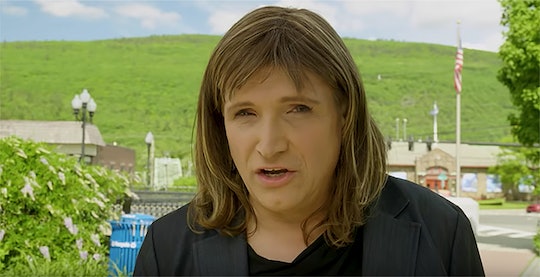 Following some tense special elections in Ohio, Kansas, Michigan, Missouri, and Washington earlier this month, voters hit the polling booths again on Tuesday night for primary elections in four states. One of the especially exciting elections was the Vermont Democratic primary for governor, a race won by former energy company executive Christine Hallquist. And if you're a member of or a supporter of the LGBTQ community, you probably already know Hallquist is a transgender woman. Although Hallquist doesn't want her transition to dominate the conversation, it's still important to note how her win is historic for transgender people at large. In an thrilling development for equality, Christine Hallquist just became the first transgender gubernatorial candidate to be nominated by a major party. So, who exactly is this trailblazer? Here are six facts about Hallquist every voter and supporter should know.

Come November, Hallquist will go up against incumbent Republican Gov. Phil Scott in the race for Vermont's governor. Although Scott is pretty popular in Vermont, Hallquist is confident she'll become the state's next governor. "I'm going to tell you why we're going to win in November," Hallquist told supporters in Burlington, Vermont, following her win, according to USA Today. "Because nothing is impossible when you're on the side of justice."

As it turns out, Hallquist has a lot of reasons to feel secure in her chances. Not only is the 62-year-old experienced in areas of concern for Vermont's voters — sustainable energy and revitalizing rural areas — but she's also running on an inspirational platform of equality for all. But if you're still not convinced Hallquist is one to watch out for, you'll probably want check out these six facts about her background.

Hallquist — formerly known as Dave Hallquist — came out as transgender in 2015, according to Slate. Hallquist's son, Daniel, documented her coming out in a documentary titled, Denial. Although the film was mainly supposed to be about Hallquist's views on the environment and energy, it switched gears when her "secret" came to light. "Dave Hallquist, who presents as a chainsaw-wielding, hardhat-wearing CEO in a male-dominated industry is a woman inside," a portion of the film's description reads, according to Denial's website.

As for Hallquist's thoughts about being a transgender person running for governor, she told LGBTQ news outlet Them:

I remember when I was a young kid thinking about these pioneers, early pioneers who settled regions that were never pioneered before, pioneers who went to the moon. I now think, 'Wow, I'm able to live out one of my early fantasies,' which was to be a pioneer. You don't set out to be a pioneer. I think it just happens. Of course, my only goal was to transition, right? Well, now you look around and you say, 'Wow, I can do more for the world.' And so I take advantage of doing more for the world. But you never set out to be a pioneer. I think you end up being a pioneer.

Well, as the old saying goes, "some are born great, some achieve greatness, and some have greatness thrust upon them."

She Knows A Lot About Energy & The Environment

Hallquist was the CEO of Vermont Electric Cooperative for 13 years, a background that gives her an edge where it concerns the environment and energy. One of Hallquist's ideas is to lay "high-speed, fiber-optic cable statewide to ensure that even the most rural areas of Vermont have internet access," according to Mother Jones.

Furthermore, Hallquist is dedicated to "Vermont's natural resources and waterways," and she often speaks out on this issues via social media.

Her Family Has Her Back

Luckily For Hallquist, her immediate family has supported her during tough and painful moments. Case in point: Hallquist's parents pulled her out of Catholic school following an exorcism attempt. Hallquist recalled, according to Vermont Business Magazine:

I always thought I was a girl. I didn’t even know what the word "transgender" was until I was 44 years old. It just wasn’t part of the language. I never lost faith in God. So I remember thinking, "Forgive them Lord, for they not know not who I am." I knew their actions were fear-based and had nothing to do with God. In eighth grade, the Monsignor called my parents and said. "I think your son needs an exorcism." But my parents were awesome. They pulled us all out of Catholic School. That was an empowering moment. I knew I was loved.

What a relief to know Hallquist has the backing of her loved ones.

Her Campaign Is Progressive

If you take a gander at Hallquist's campaign website, you'll note she supports a ton of progressive causes, like raising the minimum wage in Vermont to $15 an hour and a universal healthcare system. But Hallquist brought up a good point while discussing her so-called progressive values with The Guardian. “I would never class myself as anything,” Hallquist told the outlet. “Living wage, Medicare for all, why are these progressive policies?”

Yep, it's clear Hallquist has a knack for putting things into perspective. Why is the fight for basic human necessities often perceived as radical? Just some food for thought.

Following Trump's presidential win in November 2016, Hallquist felt it was her duty to get into politics. Hallquist summed up her decision in a poignant way, telling Politico: "Thousands of people have fought for freedom before me and died for freedom. The least I could do is give up my retirement."

Not only did Hallquist join politics as a response to Trump's presidency, but she's also got in the race to fight intolerance. It all started when Hallquist heard the group — Muslim Girls Making A Change — speaking about what it's like to be a Muslim in Vermont. Hallquist recalled to ELLE:

On Jan. 20 of this year, I was down in Montpelier for the Women’s March that was run by the youth in Vermont. And I listened to these four young women, all high schools seniors, who call themselves Muslim Girls Making Change. They were doing slam poetry on what it was like to live as Muslim in Vermont, and I cried. It was that moment that I realized we are not safe in Vermont ... The fact that they were getting harassed for wearing their hijabs and just the attacks that are being directed at them on a daily basis at their high school from other students. And on the streets. It’s hard to imagine. Of course being somebody who had just transitioned a couple of years earlier, I can certainly relate to what feels like being marginalized. But to hear it from these Muslim women was really hard for me to take.

In just a few short months, citizens of Vermont will get to the chance to cast their vote for the first transgender gubernatorial candidate nominated by a major party. It's an exciting milestone in the fight for equality, but what's especially inspiring about the race is Hallquist's desire to make Vermont a more sustainable and accepting place to live.