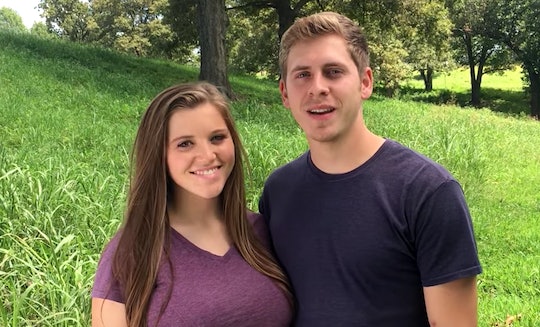 Over the years, Michelle and Jim Bob Duggar have made a name for themselves for the sheer number of children they have. The world first got a glimpse into life with more than a dozen kids back in the days of 14 Children and Pregnant Again and ultimately through the popular TLC series, 19 Kids and Counting. Consequently, we pretty much watched the Duggar children grow up before our very eyes — by witnessing the logistics of having such a large family, keeping up with the family's ultra-conservative rules, to watching courtships, engagements, weddings, pregnancies play out. Now, many of them are adults and building little Duggar armies of their own. And Joy-Anna is up to bat next when it comes to becoming a first-time parent. Fans know she's expecting her first child with new husband Austin Forsyth, but here are other fun facts about Joy-Anna Duggar that you probably didn't know.

With so many Duggar children — 19 in total, plus the ever-growing brood of grandchildren — it's all too easy to mix up names and forget who's courting/engaged/married/pregnant. Never fear! As a long-time follower of the massive reality TV family, I've got you covered. As previously stated, Joy-Anna Duggar exchanged vows with Austin Forsyth in May, 2017, according to TLC. Then, the newlyweds announced in August that they were expecting their first child, People reported at the time.

“We’re so happy and thankful to announce that we’re expecting a baby!” Joy-Anna told the publication. “Every child is such a precious gift from God. I’m most looking forward to watching Austin as a dad and raising children together with him.”

So in case you need a refresher on all things Joy-Anna, here are some fun facts about the 20-year-old mom-to-be.

As many times as I've watched the Duggars live out their ultra-conservative lives, I still can't name all of them in birth order. So let's allow the opening credits of 19 Kids and Counting to do it for us!

2. She Can Lift Some Serious Weight

Back in 2014, Joy-Anna, then 17, shocked fans with the fact that she can lift some serious weight. E! News reported that Joy-Anna's sister, Jessa, took to Instagram for some serious bragging. "Joy was tearin' it up in the workout room today! She beat her previous record by parallel squatting 145 lbs!! Keep it up, little sis!" Jessa captioned the video. See for yourself! (This is sure to come in handy when she's toting around a bunch of kiddos close in age.)

3. She Has Helped Her Husband Flip Houses

Before Joy-Anna and Austin officially tied the knot, cameras followed the courting couple as they worked together fixing up houses to be flipped. In the above clip, you can see Joy-Anna working a circular saw with the help of Austin, as they tackle a project.

4. Joy-Anna Has Appeared In A Movie

Not only has Joy-Anna appeared on our TV screens for more than a decade, she has made a brief appearance in 2011 in an independent Christian drama titled Courageous. Jim Bob and seven Duggar boys were extras in a father-son 5K race scene, and Joy-Anna and the other Duggar girls were extras in a funeral scene, TVovermind.com pointed out.

5. Apparently, She Used To Be A "Tomboy," According To Her Siblings

"When she was little, she was definitely a tomboy — always hanging out with the guys," Jessa said of her younger sister, in the TLC clip above. "Joy has two brothers directly above her and six brothers directly below." Jessa continued:

As she got older, she did start hanging out with us girls more, a little bit of shopping here and there. Not too much. But she's still retained a lot of her tomboy attributes. She's very outdoorsy, loves camping and that sort of thing. So that's just Joy.

6. Her Younger Brother Got Engaged At Her Wedding

Seriously, how cool of a sister do you have to be to share the spotlight with your little brother? That's exactly what Joy-Anna did for her younger bro, Joseph, People reported. At Joy-Anna's wedding reception, she was all set to do the traditional bouquet toss — but instead, she walked over to the woman Joseph was courting at the time, Kendra Caldwell, and handed the bouquet to her directly. Cue: Joseph waltzes out and gets down on one knee. How sweet!

With her many skills — not to mention her years of experience in helping care for younger siblings — there's no doubt that Joy-Anna will be an amazing mother. Obviously, I don't know her in real life. But based on what I've witnessed through her years on TV, she's a kind-hearted and devoted sister, daughter, and wife. And I'm looking forward to witnessing Joy-Anna take on a brand new role: Mother.