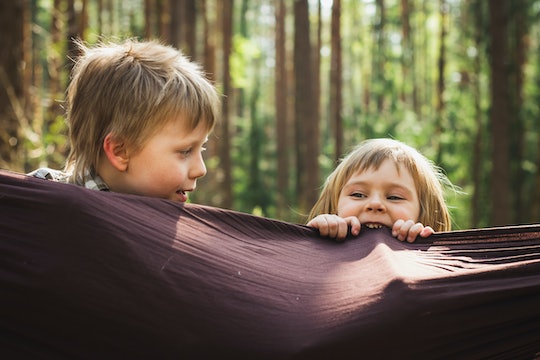 These 6 Kid-Safe Tick Repellents Will Save Your Outdoor Adventures

I have a deep, abiding, somewhat irrational fear of ticks. They are the evil vampires of the insect world, with the additional risk of potentially transmitting disease. I tend to be a tad on the hyper-vigilant side when it comes to protecting my children from the nefarious, blood thieving Lyme givers, and I assume other parents are as well. The only problem is that bug repellent can be really harsh, and tricky to understand. With so many chemicals at play, choosing one to use is daunting. So I've compiled a list of six kid-safe products that repel ticks, because no one wants problematic parasites grubbing on their preschoolers.

More Like This
15 Face Masks For Kids That Are Cute, Comfortable, & Get The Job Done
If A Tick's Head Gets Stuck When You're Pulling It Out, Here's What To Do
Vaccinated People Can Ditch Masks. Where Does That Leave Kids?
The 7 Best Water Tables For Your Little Ones

The American Academy of Dermatology (AAD) noted that ticks are particularly insidious because some of them are so tiny that they're hard to see, especially if they're on the scalp or in a fold of skin. That's why they recommend avoiding areas with brush or tall grass, which is where ticks tend to lay in wait on their supper. The American Academy of Pediatrics (AAP) recommends that if you or your children are going to be mucking about where ticks might reside, that you wear long sleeves, long pants, and a hat. The more surface area that's covered, the less likely that you are to be a part of the all-you-can-suck tick buffet. Barring that, both organizations advocate for the use of DEET at concentrations of 10 to 30 percent, with the proviso that it not be inhaled or sprayed directly on children's faces. Also, it should not be used in babies under 2 months of age.