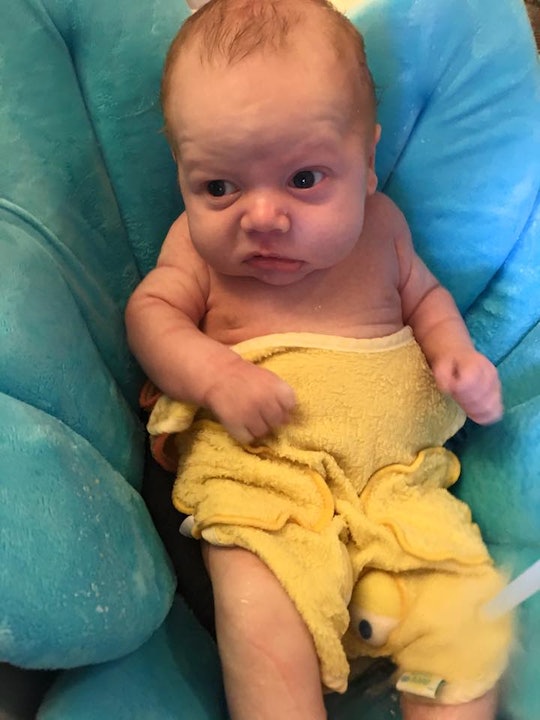 Before I had my first baby I didn't really think about the specifics of her first birth. A couple of hours after my daughter was born the nurse came in and asked if I wanted to bathe her, and I figured it must be something new moms did and went with the flow. I later learned that there are quite a few misconceptions about a baby's first bath that can confuse new parents, and medical professionals have a variety of opinions about the best way to clean your baby after birth that can make that initial dip more complicated than previously thought.

According to the American Academy of Pediatrics (AAP), for the first few weeks your baby shouldn't actually have a bath in the traditional sense. Instead, you should clean them with a washcloth, baby soap, and water. You should not submerge them in water until their umbilical stump falls off. While some hospitals bathe newborns soon after delivery, this practice has been shown to increase risk of hypothermia and breathing issues. As Joanne McManus Kuller, RN, MS writes in the journal Newborn & Infant Nursing Reviews, new recommendations involve waiting until a newborn has stable vital signs or even replacing a bath with a quick wipe down and letting parents bathe baby after they get home from the hospital. And as Today's Parent reports, researchers at Boston Medical Center found that delaying your baby's bath by 12 hours can improve breastfeeding rates. Other research published in the journal Nursing for Women's Health showed that having new parents give their baby a bath several hours after birth was better for keeping babies warm, cozy, and safe.

Regardless of where and when your baby gets clean for the first time, here's what experts want you to know when it comes to common misconceptions and how you can side-step them:

More Like This
How To Celebrate Baby’s First Valentine’s Day, From Gifts To ’Fits
What To Do If Your Baby Sounds Congested
Why Does My Newborn Shake Sometimes? A Pediatrician Explains
The Best Travel Tips For Solo Parenting
What Parents Are Talking About — Delivered Straight To Your Inbox