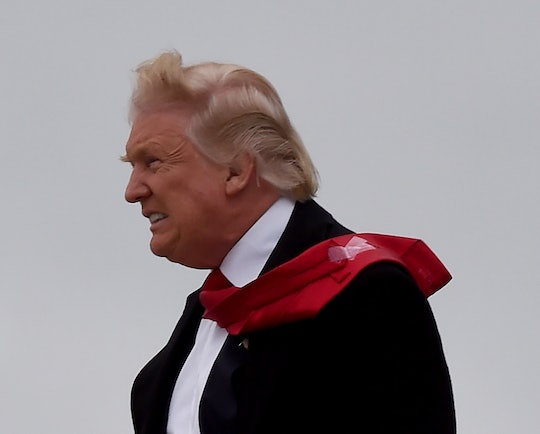 When it comes to the job of president, per the oath, the most important part is the whole "preserve, protect, and defend the Constitution of the United States" bit. And yet, time and again, President-elect Donald Trump doesn't seem to have either knowledge of, or regard for, the Constitution's basic principles. Instead, he appears to have middle school civics class-level of knowledge about the basics. Here are six Trump polices that are unconstitutional for various reasons. Only time will tell if he actually intends to follow through on these proposals, which range from using the Oval Office to enrich his family's fortunes, to fundamental violations of American civil liberties.

Now, you could make the argument that Trump understands the Constitution, but just doesn't care about its prescriptions. But based on reports out of a private meeting between then-candidate Trump and Congressional Republicans in July, Trump's own comments revealed a certain level of ignorance about the constitution.

"It was the normal stream of consciousness that's long on hyperbole and short on facts," Sanford said about the meeting, according to ABC News. Texas GOP Congressman and Trump supporter Blake Farenthold told POLITICO he thought Trump might have mistaken articles for amendments. "He was just listing out numbers," Farenthold said, POLITICO reported.

Based on statements like that one, it shouldn't come as a surprise that Trump didn't necessarily consult any constitutional scholars when coming up with his positions on the issues. Here are six proposals Trump has made that are just flat-out unconstitutional.

Trump promised vague crackdowns on Muslims in America throughout his campaign for president, but when an MSNBC reporter asked Trump whether he thought "there should be a database or system that tracks Muslims in our country," this was Trump's response, according to The Guardian:

“There should be a lot of systems. Beyond databases. I mean, we should have a lot of systems," Trump reportedly responded, according to The Guardian, which added that when pressed by the reporter on whether he would implement a Muslim registry as president, Trump responded, "absolutely."

When Trump called for a "total and complete shutdown" of Muslims coming to the U.S. on the campaign trail last December, constitutional scholars did a collective face palm over the idea. The First Amendment to the constitution protects the "free exercise" of religion in this country. But beyond the constitutional consequences of this kind of policy, there would be other ramifications, according to scholars.

“Oh, for the love of God,” Jonathan Turley, a constitutional law expert at George Washington University, told the Washington Post regarding the policy. “This would not only violate international law, but do so by embracing open discrimination against one religion. It would make the United States a virtual pariah among nations.’’

But Trump seems determined to find a way to target Muslims who enter the U.S., and one way would be by adopting a post-9-11 program called NSEERS, which targeted people from specific countries, rather than by religion. Of course, as POLITICO reported, those countries were not only coincidentally Muslim-majority countries, but NSEERS could provide a aonstitutional way to engage in a sort of "extreme vetting" and tracking of Muslims entering the United States without violating the constitution's First Amendment religious protections, according to POLITICO.

During his first interview following his stunning election, President-elect Trump seemed less ambitious about his plans for mass deportations of undocumented immigrants than during the campaign. On the trail, he vowed to round up, detain and deport more than 11 million undocumented immigrants living in this country, according to The Intercept, but the number was reduced significantly after Nov. 8. Trump said:

What we are going to do is get the people that are criminal and have criminal records, gang members, drug dealers, we have a lot of these people, probably 2 million, it could be even 3 million, we are getting them out of our country or we are going to incarcerate.

Luckily the constitution puts constraints on what local police forces are allowed to do. We don't do "police state" in America. And the 4th Amendment of the constitution protects against arbitrary arrests and "unreasonable searches and seizures" without a warrant.

“I can’t even begin to picture how we would deport 11 million people in a few years where we don’t have a police state, where the police can’t break down your door at will and take you away without a warrant,” said Michael Chertoff, the secretary of Homeland Security under President George W. Bush, according to the New York Times.

Last January, Trump wrote in an op-ed for the Washington Examiner that the Roe v. Wade Supreme Court decision granted rights that were not really in the constitution at all, according to The Hill.

The Supreme Court in 1973 based its decision on imagining rights and liberties in the constitution that are nowhere to be found.

Trump, who will begin his presidency with one vacant Supreme Court seat, has vowed to appoint justices who will overturn the Roe v. Wade decision.

But according to FiveThrityEight, rather than overturning Roe, it's more likely abortion foes will leverage Trump's conservative court appointees to try and chip away at the constitutional rights of women to have an abortion by testing restrictive laws that block abortion access like those deemed unconstitutional by the recent Whole Women's Health v. Hellerstedt decision, according to FiveThirtyEight.

Trump loves to use the press as a foil, but last February he suggested that, if elected, he would use his office to "open up those libel laws," meaning he would weaken First Amendment protections so that if any media outlet published something he didn't like he could sue them out of business, according to POLITICO.

"So when The New York Times writes a hit piece which is a total disgrace … we can sue them and win money instead of having no chance of winning because they're totally protected," Trump said, according to POLITICO.

Yes, they're totally protected by the constitution so that they can act as a check on abusive government officials. Oh, the sad irony.

There's the emoluments clause that prohibits presidents from accepting gifts from foreign governments, like, you know, a sweet real estate deal, or renting out an entire floor in the president's luxury Washington D.C. hotel. Trump has already raised considerable concern he's using the office of president-elect to enrich the Trump businesses, according to the New York Times.

Trump's transition team has not responded to Romper's request for comment about how the President-elect intends to handle potential business conflicts of interest while in office.

The U.S. also has the Eighth Amendment's protections against torture, like waterboarding, which Trump has expressed a surprising amount of enthusiasm for.

“I like it a lot. I don't think it's tough enough,” he told an Ohio audience in June, according to POLITICO. “So we can't do waterboarding, but they can do chopping off heads, drowning people in sealed cages? You have to fight fire with fire.”

Trump's blatant disregard for the country's constitutional norms have organizations like the ACLU standing ready to take on a Trump administration whenever, and wherever, necessary. The day after Trump was elected, the American Civil Liberties Union vowed to fight him if he tried to implement his proposals with this message: We'll See Him In Court.

President-elect Trump, as you assume the nation’s highest office, we urge you to reconsider and change course on certain campaign promises you have made. These include your plan to amass a deportation force to remove 11 million undocumented immigrants; ban the entry of Muslims into our country and aggressively surveil them; punish women for accessing abortion; reauthorize waterboarding and other forms of torture; and change our nation’s libel laws and restrict freedom of expression.

These proposals are not simply un-American and wrong-headed, they are unlawful and unconstitutional. They violate the First, Fourth, Fifth, Eighth, and 14th Amendments. If you do not reverse course and instead endeavor to make these campaign promises a reality, you will have to contend with the full firepower of the ACLU at every step. Our staff of litigators and activists in every state, thousands of volunteers and millions of card-carrying members and supporters are ready to fight against any encroachment on our cherished freedoms and rights.

The message is clear: if Trump tries to trample the rights of Americans and violate the constitution's protections, he's going to spend his entire presidency mired in court.