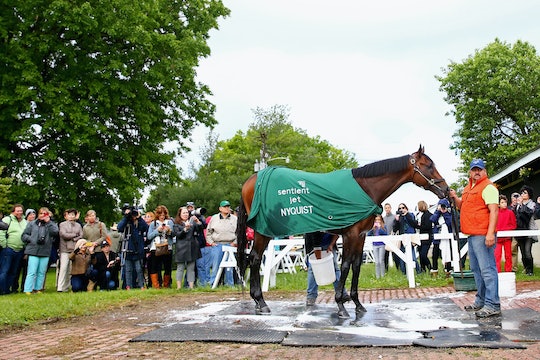 6 Reasons Why You Shouldn't Watch The Kentucky Derby

The 142th annual Kentucky Derby is coming up this Saturday, and while most people have already made up their minds about watching it, I'd like to address those who are on the fence. People who love animals but also love hats. People who were invited to an ironic Derby brunch and can't make up their minds between sleeping in and drinking mimosas. To those people, I say, don't do it. Don't support this barbaric tradition. Allow me to explain why you shouldn't watch the Kentucky Derby, or any other horse race, for that matter.

The "sport of kings" is no sport at all. And I don't mean that in a "bowling isn't a sport because you don't run" or "golf isn't a sport because it's hella boring" sort of way. I mean that it is a competition that animals are forced into against their wills. A sport is a leisure activity that humans participate in of their volition. Race horses have no free will. They are slaves, plain and simple. They're being pushed to the physical brink for the entertainment and profit of humans without any say in the matter. Horse racing is no different, ethically, from dog fighting, and to call it a sport is an insult. Those who do support it say the animals enjoy running, but there is no proof of this. There is more proof that they are often in physical distress.