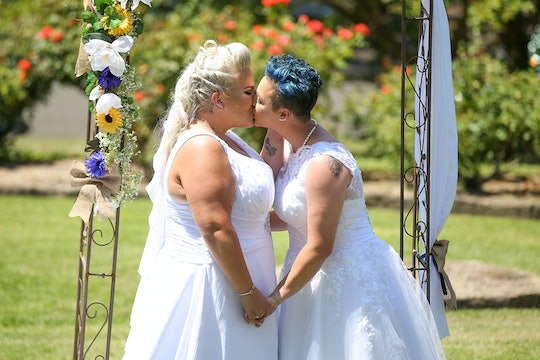 As a Canadian, getting to be in New York on the day that same-sex marriage was legalized across the United States was a lovely experience — and it seemed like Americans were finally saying goodbye to the most antiquated marriage law out there. However, after doing a bit of scouting around, I was surprised to find that six ridiculous marriage laws still exist in 2017 in the United States, and I think most Americans would probably be equally shocked by some of the rules governing couples who put a ring on it.

Some of the laws are just downright bizarre, while quite a few others seem to have come from outdated (and very sexist) beginnings. There are several strange laws out there that probably aren't actually enforced on a regular basis, but that still remain as a kind of the skeleton in the closet of legal books and can provide an interesting look at how far we've come as a society.

In South Carolina, Men Can Be Jailed For An Insincere Marriage Proposal

In a section titled "Seduction under the promise of marriage," South Carolina's code of laws outlaw proposing to a woman insincerely in order to "seduce" her. In order to convict a man of this heinous crime, though, a witness needs to corroborate the woman's story — and the woman must not have acted "lewd and unchaste" when the insincere proposal went down.

I'm not quite sure what happens when the gender roles are reversed here — but this whole law is absurd and super sexist.

In Many States, Sleeping With Someone Who Isn't Your Spouse Is A Criminal Offense

In a surprising number of states, sleeping with someone outside of your marriage can be a criminal offense, worthy of fines and jail time — for not only the spouse who strayed, but for the unmarried person, as well.

I have so many questions about this. Where do open marriages come into play here? Why does the unmarried person have any responsibility? What if they didn't know? Why are we still slut-shaming in 2017?

Maryland, strangely, outlaws "adultery" but only fines folks $10 for straying.

No Sleeping Naked In Hotel Rooms In Salem, Massachusetts

It's illegal for married couples to sleep naked in hotel rooms in Salem, Massachusetts, according to Woman's Day. You've got to love those very conservative, impossible-to-enforce laws out there that remind us of how ridiculously traditional the United States used to be.

Child Marriage Is Actually Still A Thing, & That's Not At All OK

While some of the outdated laws out there aren't affecting anyone and are worth a laugh, there are some that are actually harmful — and need to be updated ASAP. According to The Washington Post, nearly every state has exceptions to their minimum age rules for marriage, and those workarounds can see children as young as 12 get married with only parental consent or judicial approval needed.

This isn't one of those rules that simply exists without causing any real harm, either. Between 2000 and 2010, according to The Washington Post, more than 167,000 children (mostly all female) were married in the United States. Experts say that number could actually even be as high as 248,000.

In a few states, including Virginia and South Carolina, having sex as an unmarried person is against the law. Thanks to a Supreme Court ruling in 2003 that essentially ended "all morals legislation," these laws obviously aren't actually enforced — but they somehow remain a part of state legislation.

Same Goes For Living Together Before Marriage

If you're into cohabitating without being married (as 18 million Americans were doing last year), you could be breaking the law in a few states. Florida only repealed a law against unmarried cohabitation in 2015, while Michigan and Mississippi are still rocking similar outdated laws. Again, those are rules that are never actually enforced in the two states — but their existence in state legislation means paying tribute to some pretty sexist, outdated times.

As a society, the United States luckily seems to be moving forward in terms of acceptance. Now, if we could just get updated laws that actually reflect that progression, we'd be doing great.