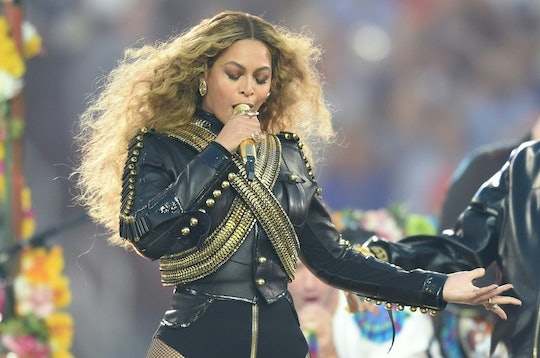 6 Signs Beyonce Is In The Illuminati, Regardless Of What She Says In 'Formation'

Who run the world? The Illuminati. And Beyoncé. Obviously. While the rest of the world only heard her reference the Illuminati recently in her new song, "Formation," there's people who have known of the Beylluminati connection for ages now. There's even a website entirely dedicated to signs that Beyoncé is in the Illuminati. Consider yourself enlightened.

As the theory goes, both Beyoncé and her husband, Jay Z, are big supporters of the Illuminati, the rumored 18th-century intellectual secret society that aimed to restrict the church's influence on public life and promote gender equality. (They sound just awful, don't they?) While historians say the Illuminati were eliminated in the 1780s, the Internet obviously knows better, and you better believe Beyoncé and Jay Z are at the helm of a very active and now (for some reason) evil, devil-worshipping Illuminati.

If you're not ready for the truth, you should close out of this window now. There's some incredibly damning evidence linking Beyoncé to the Illuminati, and the fact that she sang "Y'all haters corny with that Illuminati mess" was just the cherry on top. (No, don't analyze those lyrics too carefully. It doesn't matter what she appeared to be saying about her Illuminati speculators — that is obviously just a cover-up so that she could subliminally get the public thinking about the Illuminati. If you play it backwards, I'd bet it sounds just like devil worship, too.)

So, are you ready for the damning proof?

That Little Triangle Shape Beyoncé Makes With Her Hands

Boom. Is your mind blown right now? That triangle looks exactly like the triangle that represented the Illuminati. Jay Z uses it to represent his record label, Roc-A-Fella Records (because he is also an Illuminati member — keep up, now, folks). The power couple is obviously giving a shoutout to their Illuminati homies every time they do this (I'm told their Illuminati squad include Lady Gaga, Madonna, and Kanye West).

I mean, look at the triangle. Look at it.

In the pursuit of the truth, I'll even throw in some Yeezy proof for you guys:

Even the Baby Name She Chose Is An Illuminati Reference

"Blue Ivy." Have you ever heard of a child named after a color before? Not likely. But here's the thing: she's not. Beyoncé's daughter, naturally, will be inculcated into the Illuminati life, and Jay Z and Beyoncé decided to start that immediately by branding her with the name: "Born Living Under Evil, Illuminati’s Very Youngest," according to Pop Dust.

I bet you can't unsee it now. This was one of Jay Z and Beyoncé's sneakier moves, and I might not have even noticed it if it weren't for Pop Dust pointing it out. Very sneaky, you two, but the world is on to you.

Aaliyah's unfortunate death in 2001 was actually due to her desire to leave the Illuminati (much like Scientology, the Illuminati have trouble letting go), according to Refinery 29. Aaliyah was on her way to great heights with the Illuminati backing her, but when she decided she wanted to leave the secret group, she was killed as a blood sacrifice (so the theory goes). As Refinery29 tells it, she was meant to be the queen of the music industry for the Illuminati, but Beyoncé ended up taking her place.

If you really want to get further into it, there's some solid numerology to back it all up. (If you define "solid" really loosely.)

Sasha Fierce Is Basically The Devil

Guys, Beyoncé really likes to flaunt her Illuminati side at the Super Bowl. During her 2013 performance, she used black, white, and fire — which are all super satanic, yo. And there was a blackout, which was obviously caused by her evil Illuminati ways.

In a 2008 interview with Marie Claire, she even straight-up revealed that when she's performing as Sasha Fierce, she's not herself. "I have out-of-body experiences [on stage]. If I cut my leg, if I fall, I don’t even feel it. I’m so fearless, I’m not aware of my face or my body." Clearly, when she takes on her Sasha Fierce persona, she is being possessed by something evil.

I mean, if she had three hands, she'd be flashing three sixes, and everyone knows that's just about as bad as it gets.

The Illuminati Made Her Famous

Beyoncé is crazy famous — people even call her "queen." Do you think that sort of fame just happens? Of course not. Obviously, it's the work of a bunch of inside Illuminati members with high-up connections in the music industry. You think her empire was the product of talent and hard work? Don't be silly. Open your eyes to the Illuminati.

So forget whatever you've heard about Beyoncé being a smart, productive, badass woman, or the Illuminati being an intellectual society that no longer exists. Here's the real proof that Beyoncé is definitely a member of the Illuminati. Use it wisely, friends.