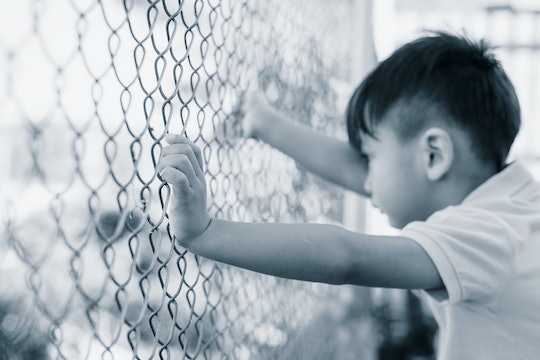 6 Subtle Signs That Suggest You Were Depressed As A Child

Childhood mental health issues are not something that magically go away just because you're a grownup now. If you had depression as a kid, even if it was acknowledged and you had therapy, it still can revisit you as an adult. Now that you're older, you may start to see some signs of childhood depression return, or maybe even be surprised to find out that what you may be feeling may be depression at all.

Depression as an adult may feel similar to things that you felt as a child: low energy, the inability to make decisions, and even that low-self esteem you struggled with as a teen and chalked up to normal teen angst could all be subtle signs of depression. If you were officially diagnosed back then and are aware of your mental health triggers, you may have an easier time recognizing depression as such if it returns now. But it's also possible that sometimes symptoms of depression in childhood are so subtle they are missed or are written off as something else, according to Dr. Diane DiGiacomo, a board certified child and adolescent psychiatrist in private practice in New York.

It's also common for someone who had severe medical issues as a child to have depression. Sometimes when everyone is so busy tending to the physical side, the mental health part of it can get ignored and buried until adulthood.

Furthermore, women with childhood depression may also find they are more susceptible to postpartum depression. Dr. DiGiacomo warns that even if this doesn't hit you after your first pregnancy, there's still a chance you can be affected after subsequent pregnancies. She also says that in people who have depression before puberty, there's a higher rate of bipolar disorder in adulthood.

When an adult or a child presents signs of depression, it's important to have a medical evaluation and rule out infection, tumors or neurological issues, Dr. DiGiacomo recommends. She also suggests you seek help if you are depressed, as suicide is the leading cause of death in women 10-34 years old. If you are concerned about the severity of your own depression or someone else and suicide is a concern, seek medical help immediately, but also make sure to take safety precautions, including eliminating firearms and medications from your house.

Depression is very treatable, both with talk therapy and pharmaceutical help. Because it's not a visible illness, many people doubt themselves and put off seeking treatment — especially mothers who often put their needs after everyone else's in the family. While it may seem more convenient to try to soldier through, it's vital for you to get help (seek out a psychiatrist or psychologist) if are concerned about your well-being. You can also visit The National Alliance on Mental Illness for tips to help you find the right specialist.

If for whatever reason you are trying to pinpoint if you were depressed as a child (perhaps you're not feeling so great now and trying to see if there is a connection to your adolescent years) here are some signs that suggest you suffered from childhood depression.

More Like This
The Best Halloween Family Pajamas To Match Your Boos
16 After-School Snacks For Hangry Kids
Tips For Apple Picking With Kids
Is There Parenting Advice To Take From ‘Strangers To Ourselves’?