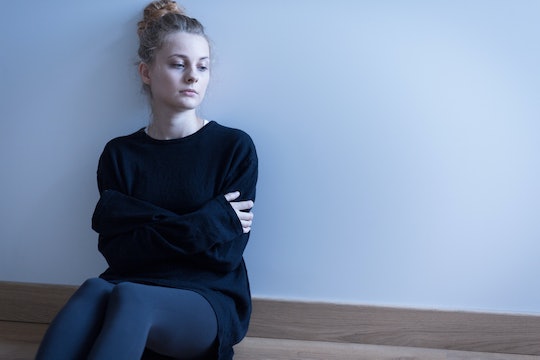 6 Signs Your PPA Is Dangerous

Postpartum anxiety, or PPA, is a struggle that's comparable to postpartum depression (PPD) but isn't as well known. Most women think that when they aren't experiencing symptoms of sadness or suicidal thoughts in correlation with anxiety that it isn't an issue. But just because symptoms don't fit classic PPD, doesn't mean they should be ignored. The signs your PPA is actually dangerous exist, but because they don't present themselves in the form of depression, many moms feel the need to brush it off — and they shouldn't

Being a little more worried or cautious postpartum isn't out of the norm. I mean, you now have someone's entire life in your hands. So if worry sets in, you may begin to wonder what defines PPA and how to differentiate it. When you find that worry and fear are dictating every move, you should pay attention, especially if worry is driving you to the point of exhaustion by causing sleepless nights or keeping you in constant fear.

According to HuffPost, PPA may be even more common than PPD. It can cause women to have constant, sometimes paralyzing feelings of worry and make it hard to eat or sleep. It often remains undiagnosed because symptoms are written off by moms as a response to a new baby. In an interview with Parents magazine, psychologist Jonathan Abramowitz said postpartum anxiety is a hidden disorder because it is so often unrecognized by moms. He shared that it hasn't been discussed or studied enough, even though it's more common than PPD.

So if you find yourself in a constant state of worry, acting totally out of character, or always harboring fear, read through some of the signs below that may indicate your PPA is more serious than you think.