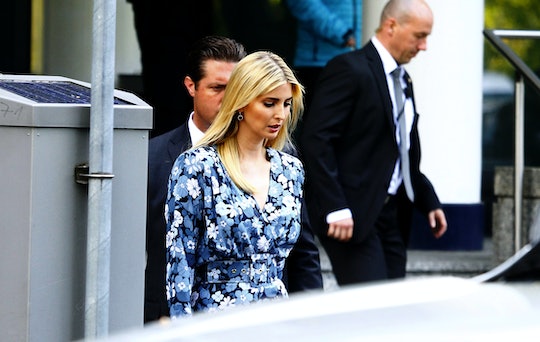 This week, first daughter and senior adviser to the president, Ivanka Trump, released her new book, Women Who Work: Rewriting the Rules For Success, which is described by Trump herself as a way to "help our generation change the narrative around women and work." However, since the book came out on May 2, there has been no shortage of criticism regarding its content and misguided purpose. Her privilege is tangible, and her feminism is unfortunately superficial and misses the mark. However, there are several surprising facts from Ivanka Trump's new book that shed an important light on the Trump family, Ivanka's life, and this latest administration as a whole.

While a large portion of her book relies heavily on inspirational quotes from others (in the introduction alone, Trump uses 10 different quotes on one page, some of them a paragraph long), she does provide several personal anecdotes in order to sell her story and her advice for success. From the extraordinary job offer she turned down after college, to a hiking trip that attempts to imitate author and novelist Cheryl Strayed'sWild, Trump's new book is filled with random facts that you might not have known before (although you might not want to know them).

Here are the most surprising revelations from Ivanka Trump's, Women Who Work:

She Was Offered A Job With Anna Wintour

Describing her first job prospects, Trump describes getting a call during finals. "It was Anna Wintour, the editor in chief of Vogue," she recalls. "She'd heard I was graduating soon. She knew I liked fashion. She wanted to offer me a job at Vogue." Trump also reveals that she "graciously declined" the offer, instead opting to work in real estate and development with Forest City. (GASP.)

She Went Soul Searching In Patagonia

In the introductory chapter of Women Who Work, Trump describes an "eight-hour hike through Patagonia," which she describes as "a moment in time that was truly pivotal in shaping the rest of [her] life." She took the trip, she says, in order to decide whether or not she wanted to "take the leap and join [the] family business." Obviously, she ended up joining The Trump Organization, but she credits the hike through Patagonia as one of the reasons she is so successful in her career now.

She Says Her Husband Grounds Her

While there are multiple times throughout her book in which Trump recalls her husband's amazing ability to calm her, her anxiety over speaking at the Republican National Convention is one of the more notable instances. "True to form, it was my husband who talked me off the ledge and gave me the confidence to push through," she writes.

Her Kids Call Her Mother "Glamma"

In discussing the inspiration Trump has gleaned from her mother, Ivana Trump — someone who she says was "unapologetically feminine in a male industry" — she writes, "My mother is today 'Glamma' to my kids and one of my greatest sources of support."

She Unplugs During The Shabbat

Before she married Jared Kushner in 2009, Trump converted to Judaism. Since then, she and her family have adhered to the religion and its principals. "From sundown Friday to Saturday night, my family and I observe the Shabbat," she states. "During this time, we disconnect completely — no emails, no TV, no phone calls, no internet."

She's Starting To Get Back Into Cooking

One of Trump's main goals in life now is to start cooking more. "I gave up cooking for a while when my kids were very young because I felt bad spending so much time in the kitchen when I could have been hanging out with them," she writes. "But now Arabella and Joseph are old enough to help...."

While Trump's new book may not be for everyone, there are certainly some things to be learned from Women Who Work — even if they're just jealousy-inducing anecdotes about Vogue job offers, or sweet stories about her family.