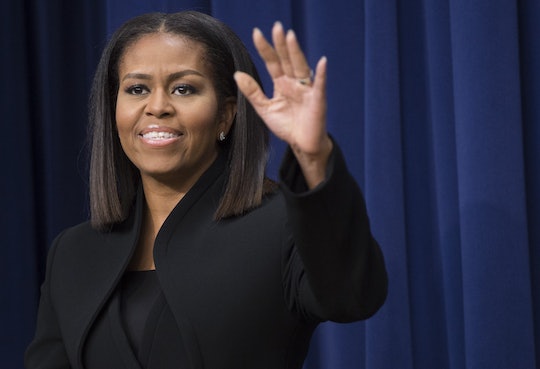 Michelle Obama has earned a long, nice vacation with her family after eight long years of dedicated service to our country. From getting kids to eat healthier and move more, to offering words of encouragement and inspiration when we needed it most, Americans have fallen for Mrs. O — hard. The Tonight Show Starring Jimmy Fallon gave everyday folks an opportunity to tell her just how they felt before she leaves the White House, and the result was amazing. Here are six "thank you's" to Michelle Obama's on The Tonight Show that will make you sob and remember just how lucky we were to have Michelle LaVaughn Robinson as our first lady.

The Tonight Show's premise was pretty simple. Put people in front of Michelle's official portrait and give them an opportunity to express just what she has meant to them. The twist was that the first lady was actually waiting just behind the curtain. But the real surprise was that what was supposed to be a lighthearted and fun way to celebrate a very popular first lady quickly turns into a gut-wrenching reminder that we're not just losing a popular president's wife, we're losing one of America's actual living treasures and our first truly modern first lady — stylish, humble, wicked smart, and committed to doing what she thinks is right, even when it's hard.

According to Gallup, 79 percent of Americans have a favorable opinion of Michelle, making her hands-down not just more popular than her husband, but a powerful force in American politics who NPR described has transcended her role "from political spouse to pop culture icon."

This week, President Obama lavished praise on his wife's time in the White House too, wiping away a tear in his farewell address as he lovingly paid her a tribute, according to CNN:

Michelle Lavaughn Robinson, girl of the South Side—for the past 25 years, you have not only been my wife, the mother of my children, you have been my best friend. You took on a job you didn't ask for, and you made it your own with grace and with grit and with style and good humor.

And Obama isn't the only person who feels that way. The raw, emotional moments portrayed on The Tonight Show between Michelle and everyday Americans are a powerful reminder of how important Michelle's presence has been in the White House, and how important the role of first lady can be for our country. Here are a just a few of the most sob-worthy parts from Fallon's FLOTUS send-off.

"Because of you, I know that my race does not define who I am or what I can accomplish," A woman named Alicia told Michelle. "For years you have shown our nation countless times that through dignity, compassion, and respect we can overcome any hardship. Thank you for inspiring all Americans, including myself, to continue to 'go high" even as the challenges of life make us feel low."

2. On The Dream Of Working For Mrs. O One Day

This young woman told the FLOTUS portrait her dream was to work for Obama one day. The first interview seemed to go pretty well.

3. On Her Powerful Influence

"I feel the same way about you that I feel about the best teachers I've ever had," Henry said to Obama's portrait. "Those special teachers that you never forget because they realize the powerful influence they can have and that's what you've been to me and millions of people..."

This lady couldn't send off Michelle without giving her props for out-dancing Fallon during her "Mom Dance" segment, which Mrs. Obama took a moment to celebrate.

5. From One Working Parent To Another

There was also a father who thanked her for her example and kindness, crediting Michelle for encouraging his daughter to eat kale, thanks to the first lady's signature Let's Move campaign.

Michelle even got a surprise from one of her college friends from Princeton who told her, "I really want to thank you for the role model you've been as a First Lady," she said. "Any little girl knows no matter her beginning she can ascend to limitless heights."

Yep, Michelle Obama has made her country proud and I hope she knows how much she will be missed. Now if you'll excuse me, I'm going to go and finish my ugly cry.