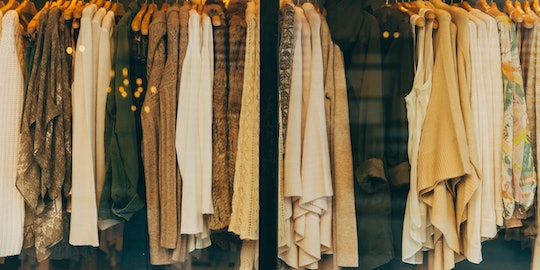 Being a starving artist for most of my adult life, I found that the easiest job to pay the bills was in retail. Not a lot of commitment necessary, flexible hours — ideal for someone like me. For a number of years, I found myself working in the beauty department of a health food store. The pay was great, as were my co-workers, there were no quotas, and I believed in what we were selling. It wasn't a job I expected to work at for the rest of my life, so I never really considered what it might be like to become a mom who works in retail. I just didn't think I'd be there that long.

Eventually, I got pregnant, went on maternity leave (for a year, because I’m Canadian), and came back to my job as someone very different than who I’d been before I left. Obviously motherhood changes you, but when you move into the parent zone as a retail worker, it’s kind of a big deal. Clearly this is a generalization, but in my experience, people who work in retail tend to be younger, childless, and on their way to doing something different with their lives. Or if they are older and/or have kids, they're in retail, like, they're committed and focused on moving up the chain of command. I was neither young nor committed, but I was definitely in it.

For me, working retail went from being a place to shoot the breeze while getting my job done, to a place where I worried about whether my daughter was adjusting to daycare. It was a place I had to make excuses to for being late, because my daughter was crying so hard she threw up that morning. It was a place that didn’t really matter anymore, unfortunately, when compared to my daughter.

Still, I kept working for another two years, before transitioning to writing full time after my second baby was born. And in the process, I learned a lot about being a mom while juggling a retail job.

More Like This
Ashley Graham On The “Fun, Organized Chaos” Of Raising Twins
17 Best Potty Training Products For Toddlers
From Captions To Gifts, These Are All The Kindergarten Graduation Ideas You Need
Here’s What You Need To Know About That Viral 1960s Baby Formula “Recipe”