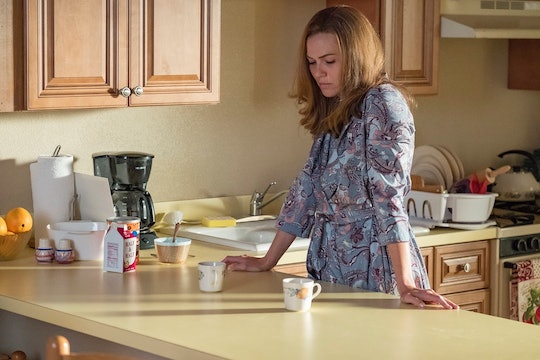 The 'This Is Us' Theories That Will Make You Say "What?"

I live for This Is Us and I have a feeling I'm not alone. Tuesday night's episode showed Kevin in need of "peeling back" the layers of his late father; Jack, Kate, and Toby struggle find common ground in amidst Toby's devastating depression; and still, the mysteries over Jacks' necklace — and his time in Vietnam — are ever present. It's a lot to unpack. Now, I have my own *strong* opinions about where Season 3 is headed, but there are a few This Is Us theories that will make your head spin.

I could spend all day delving into TIU fandom theories but the ones that make me all warm and fuzzy inside are those that aren't the most obvious answers. For example, Tuesday's episode “Kamsahamnida,” was an ode to the only phrase Randall knows in Korean ("thank you"), but I think it's more than that. There's nothing at random in the writing. There is no topic or connective thread that doesn't support another and there is nothing of value that won't hold throughout the entirety of the series (like Jack's necklace, or even Rebecca's Moodshadow necklace). The show is so personal to me, and to a lot of other fans who feel connected to specific storylines within the TIU-realm, but it's still fun to tour the web to see how others think some of those threads will play out. Here are some of the theories viewers really need answers to before they (I), combust (please, writers, please).