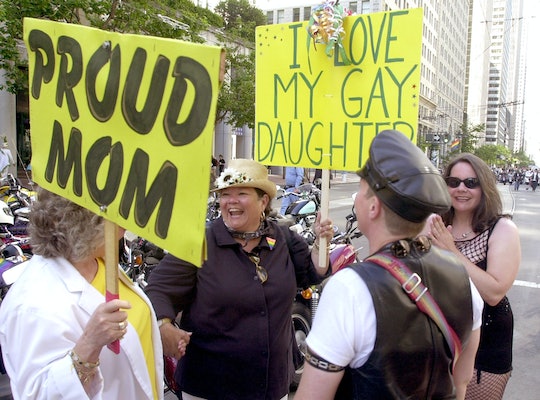 It's hard to grow up feeling confident, loved, and safe without the full support of family members, in everything a kid does. Which is why all the times parents celebrated their LGBTQ children in public — whether those parents were celebs or not — mean everything. Not just for the child in question either, but because the public support and acceptance is good for everyone. Kids who unfortunately don't have families that will accept that get to see that not everyone is terrible. Other parents who have LGBTQ children can feel some solidarity. There is still so much discrimination and stigma that the LGBTQ community (which includes their families) that it's almost necessary to make a public display of support.

It makes coming out for children all the easier. Dan Savage, the founder of the It Gets Better Project and an advice columnist, recommends that children have a "coming out plan" when they talk to their parents. He also warns teens and grown children alike to make sure their physical safety isn't at risk and to simply not let any parental meltdown "work."

"Coming out is not the solution to your problems," he said. "Coming out is often the beginning of new problems." Savage adds, "We shouldn't just blindly encourage kids to jump out. They need to come with a plan: who your parents are, friends are, whether you're going to have support and then line up that support."

Luckily, not everyone needs to be convinced. Here are some parents who went all the way when it came to making sure their LGBTQ kid got all the love they deserved.

Fields once told Oprah that she tells people, "so what," when they ask about her son's sexual orientation.

He said that he and his wife sort of always "knew."

It's a little hard to watch how difficult it was for some of these religious parents to come around, but that they can speak out for their kids in a difficult community is a pretty big deal.

Her daughter is a lesbian and Shepherd has been an advocate for same-sex marriage and LGBTQ rights since forever.

Laughter is usually the best medicine.

Rice posted on Facebook about the need to end religious based discrimination and stood up for LGBTQ rights.

You really can't put a price on love and support from friends and family. These parents seriously have it going on.