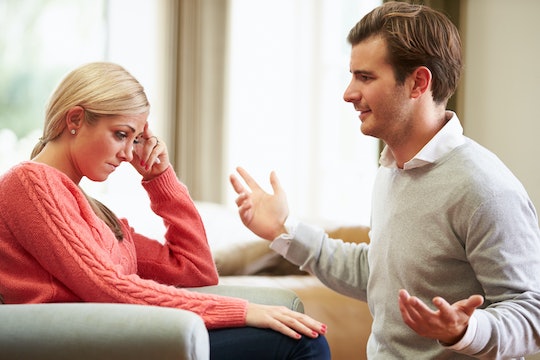 6 Times You Don’t Need To Accept An Apology, According To Experts

When you hurt someone or someone hurts you, you probably often think that you know how things will go: you (or they) will apologize, you'll talk things out, one or the other of you (or both) will accept the apology, and you'll move forward. Whenever you apologize to someone else for treating them poorly, letting them down, or betraying their trust, you probably take for granted the fact that they'll accept your apology. But there are some times you don't need to accept an apology — and perhaps sometimes when you shouldn't automatically assume that someone else will accept yours.

"I talk with clients about what it is they need so they can make a decision that is really right for them," Erin Parisi, LMHC, CAP, a licensed mental health counselor, tells Romper in an email exchange. "It's always OK not to accept an apology, but I think [it's] what an individual needs that determines when and if it's appropriate to accept it. Many people see accepting an apology as a way of saying that what the person did is acceptable, but I don't take it to mean that. In my mind it's more of an acknowledgement that everything that can be done has been done, and an attempt to move forward is the next step."

And even in these situations, when you're perfectly entitled to not accept an offered apology, it's important to remember that part of moving on can mean coming to a place where you're at peace with what happened and ready to let some of that go.

"I do believe that we can get to a place of forgiveness without accepting someone’s apology...Forgiveness is for us, it’s not about the other person and a lot of times people misconceive that, they think that, ‘well if I forgive them, then that means that they think that it’s OK or that I’m OK with this,’ but the truth is, forgiveness isn’t for them, it’s for you," Melissa Dumaz, MS, LMFT, a licensed marriage and family therapist, says. "It’s so that you truly heal within yourself — inside and out — about what has happened."

And in these situations, it's completely within your right to not accept an apology if it doesn't feel right to you.

More Like This
How To Tell Your Partner You Want to Separate, According To Experts
50 Love Song Quotes That’ll Give You The Feels
What Is Acid Reflux Tape? Chrissy Teigen Swears By It
Is It Good For Babies To Be Exposed To Germs? It’s Complicated