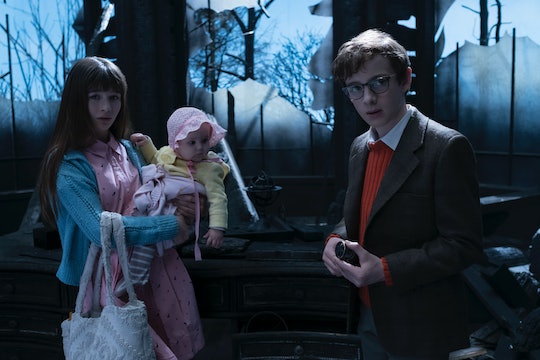 The Netflix adaptation of A Series of Unfortunate Events is poised to be a whimsical take on the children's books by Daniel Handler when it's released on Friday, Jan. 13. The dark series spans thirteen (ooh, spooky!) books, which incorporate absurdist and gothic fiction, mystery, and steampunk elements to flesh out the story. One of the series' signature quirks is that the narrator, Lemony Snicket, regularly interrupts the tale to warn readers of how terrible it's about to become and to advise them to stop reading. These six unfortunate events that happen in A Series of Unfortunate Events come from the first four books in the series, which make up the first season of the show.

Much like the 2004 movie adaptation of the books, Netflix decided to split the installments up to give themselves a multi-season arc. The film tackled the first few books, with filmmakers intending to churn out a franchise of sequels quickly (since the Baudelaire children do not age throughout the series, but child actors, unfortunately, do). Sadly, the second film got held up in production and they lost their shot at a franchise. Hopefully, the first season of the Netflix version is successful enough that we'll get to witness the whole series' worth of unfortunate events. But for now, here's what we have in store. Warning, book spoilers ahead!