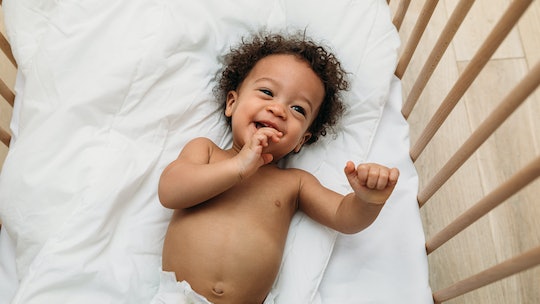 6 Videos Of Babies Laughing That Will Bring You Pure Joy

Navigating through life and facing the world with all of its real inescapable issues can be exhausting. No matter who you are, everyone is affected by terrible incidents and unspeakable tragedies. Whether it's mass shootings, actions fueled by racism, sexual abuse, or natural disasters, life can undoubtedly be tough. That's why it's important to have a pick-me-up every now and then, to remind yourself about the world's beauty and its simple, everyday light-hearted joys – like witnessing an innocent, cute, drooling baby laugh their belly off. Seriously, what's sweeter than that? Ready for your pick-me-up? Here's six videos of babies laughing that will make you forget all the awful things in the world. Because sometimes a reminder this cute is just necessary.

More Like This
A 25-Year-Old Mom Thought She Was Pregnant With 7 Babies. She Gave Birth To 9.
YouTuber Faces Heated Criticism For Putting Down Family Dog After It Bit Her Son
Police Are Investigating A Florida School Principal Who Paddled A Student
What Parents Should Know After A Mom Influencer’s Kidnapping Allegations Went Viral

The roundup of videos shows a few babies enjoying life, their parents, their family dog, or ripping paper. Remember when you used to find the simplest things entertaining and hilarious? I distinctively remember the joy I felt, running after the ice cream truck, playing tag with my brother, or building kid-sized forts with bed sheets, vacuum poles, and sofa cushions in elementary school. And even though my parents were likely a bit annoyed having to skillfully tiptoe around my new "home" in the middle of the living room, I know they enjoyed watching me glean tremendous joy from such a simple creation.

These laughing babies, amused with what most adults would find to be ridiculous gestures, is a reminder that it's never too late to express uncontrollable joy. Their laughter and happiness says it all.

In a video filmed in 2007, a cutie with an ice cream cone can be seen perfecting "the evil look," but of course, he's anything but evil. The little one is so amused by his look, that he joins his parents in a contagious laughing spree that is seriously too precious to bear.

Blogger and breastfeeding champion Ashley Wright posted a video on her Instagram account with her adorable daughter, who's uncontrollably laughing. The best part of the video is that it's hard to tell exactly what is evoking such squealing, and honest laughs from the little one. It's clear she's just happily living her life, and enjoying a good laugh with her mama.

There's something therapeutic about ripping and shredding papers to pieces, right? Well this cutie gets it, and is laughing her way through the fulfillment she's feeling by tearing a piece of paper to shreds. And somehow she manages to make the whole paper-ripping thing look really hilarious.

Dogs love to eat. And this baby loves that dogs love to eat. She loves it so much that she literally can't stop laughing watching a dog eat popcorn. The video, uploaded by Kyoot Kids, is also a reminder that our furry friends can be pretty hilarious too.

We've all been there. Our bodies are telling us it wants to go to sleep but we fight it anyway. Well this adorable baby is fighting sleep with a bunch of giggles and a smile. If there was ever a contest for the cutest way to fall asleep, I think she'd nail it.

What better way to end this roundup than a video compilation of triplets uncontrollably laughing? In the compilation uploaded by Funnyplox, groups of triplets can be seen laughing together for various reasons, and giving triple the amount of cuteness feels.

Thanks for the laughs, babies.

This article was originally published on June 1, 2016