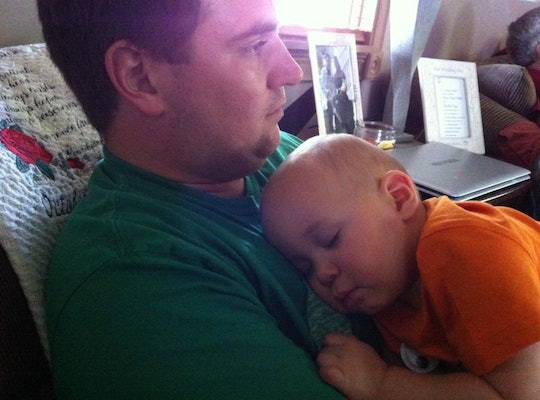 6 Ways Celebrating My Kid's Father Has Helped Me Heal

Father's Day's always left a salty taste in my mouth. Even the words suggest we honor all fathers in our lives, regardless of how deserving. Sure, there's some great fathers in the world, but I didn't really have one growing up. Since having children, my husband has continually shown me what a father should be, and not what I've known. In fact, celebrating my kids' father has helped me heal on Father's Day, proving that we truly don't have to be shackled to the torment of our past.

In the fall of 2008, my mother and I got a phone call that changed me in ways I'm still not able to verbalize. I'd been searching for my biological father for years, but it hadn't felt more pressing than when I discovered, after two miscarriages, that I was pregnant with my son (whom I planned to name after my father). This mysterious man had floated in and out of my childhood, though never as someone I knew to be my father. I was raised by someone else, called that man "dad," and though we shared the same last name I never felt like I truly belonged.

It wasn't until I was 9 years old that I discovered I had another father out there, somewhere. That this man wasn't even a stranger, but someone I'd known in passing through the years. Suddenly, at an age younger than my daughter is now, my entire life flashed in front of me. Everything I thought I knew about myself, my life, were lies. All those times I felt like the outlier or the obscure one, I was right. Things that never made sense before suddenly did, and all these questions I didn't have surfaced. Like the tiny bubbles that swim to the top of a boiling pot of water, I was in need of answers before the remaining pieces of me burst.

The last and only time I saw my estranged biological father, I was 16. When he stopped by to take me to dinner, he didn't tell me about the cancer he was just diagnosed with. Actually, he didn't tell me a lot of things. We parted ways with my decision not to contact him again. No matter how similar we were or how badly I needed him in my life, I felt disrespectful to the father who raised me. By the time I realized the mistake I'd made, and how desperately I wanted to re-connect with my biological father, I couldn't find him. I searched, for years, with no trail to follow. Then, Thanksgiving weekend in 2008, I stumbled onto the answers I was looking for. My father had died. When I finally tracked down the old obituary, I was the only surviving child listed.

I was so taken aback, so distraught with grief and regret, that I was essentially traumatized me in ways I'm still not healed from. There are triggers that remind me of that night of my junior year, and how I so boldly decided not to pursue the relationship. Triggers of how very much I miss someone I wasn't really allowed to know. Triggers when I look at my son, who sometimes has my biological father's exact facial expressions.

This is why I don't look forward to Father's Day every year. It's why, on every Father's Days since, the person I celebrate and focus on most is my husband of nearly 10 years and the father of my two amazing children. Through the years of trying to make sense of who I am, he's been steadfast in reminding me where I belong: right here with him and our babies. I'll never be a whole person, and I'll never be fully healed from the loss, but in celebrating the man who didn't leave me, or his kids, I'm starting to.

More Like This
When Does A Baby Recognize Their Father? A Pediatrician Explains
The Best Dressed Parents At The 2023 Grammy Awards
Adele’s Grammy-Nominated Album Features A Beautiful Song Written For Her Son Angelo
Marie Kondo Gives Up Tidying Post-Kids, Sparking Joy For Moms Everywhere
What Parents Are Talking About — Delivered Straight To Your Inbox