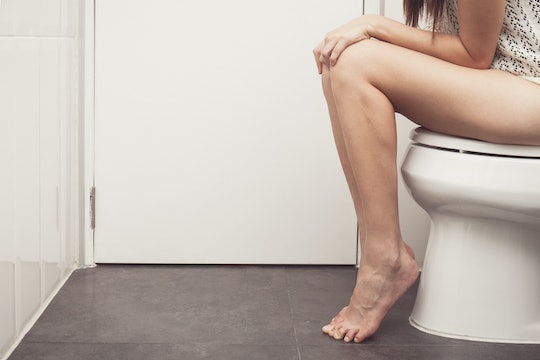 6 Weird Signs You're Not Pooping Enough

The well-known children's book, Everyone Poops, got it right. Everyone really does poop. And if you're healthy, you probably don't think about it all that much, unless something changes or there's an obvious problem (or you're going on a trip with people you don't know really well and have to think through the logistics of pooping discretely). Questioning whether your digestive system is operating as it should? Then you'll want to look out for the weird signs you're not pooping enough (aside from the lack of poop in the toilet).

But before getting down and dirty, it's important how often should you go number two, Well, according to Greatist, there's no hard and fast rule on what's normal when it comes to pooping. However, most people fall somewhere in the range of three times a day to once every three days, which means most people average about once a day. Although there are some warning signs that could indicate big-time problems (pencil-thin stools, along with other symptoms can indicate colorectal cancer, according to Healthline), most changes in your bathroom habits aren't something to be overly worried about, though if you are, a gastroenterologist may be able to give you some advice and peace of mind. If you're not pooping enough, particularly if you fall outside of the normal range, and you're worried about it, getting more exercise, drinking more water, and eating more vegetables can all help make you a little bit more "regular."

But to figure out if you need to implement these habits n the first place, take a look at these signs you're not dropping enough deuces.